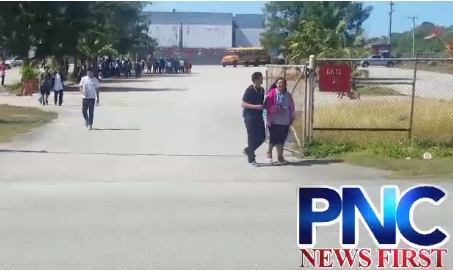 A couple of concerned parents reached out to PNC after seeing students getting soaked from the rain while waiting for their rides to pick them up.

Guam – Simon Sanchez High School students have no shelter from the rain or sun every morning when they get dropped off to school and every afternoon after dismissal when they head to their buses or cars.

A couple of concerned parents reached out to PNC after seeing students getting soaked from the rain while waiting for their rides to pick them up. GDOE Acting Deputy Superintendent Chris Anderson says the awning made of tin had to be removed because the deterioration posed a danger to students. He explains that the department spoke with the school principal about alternative solutions.

Anderson says, “It’s not that DOE is opposed to building a canopy. It’s just we may want to balance out the investment of putting up a canopy and the amount of time students would be moved to the new facility. Be that as it may, there may be more cost effective solutions that the school can use. The issue right now is inclement weather. There is a door access to the main building closer to where the buses are at that the school could allow students to use. Ultimately, it’s a school-based decision.”
Yesterday, GDOE Superintendent Jon Fernandez says the $100-million dollar Request for Proposal to fix up the schools is still in negotiations.