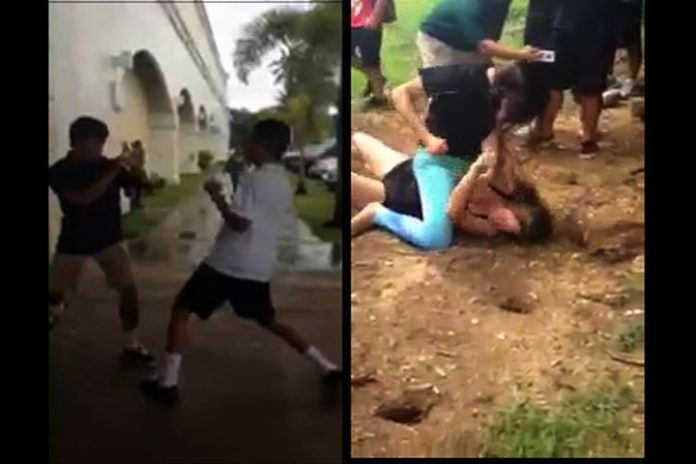 Guam – There are some leads on the teenage fight videos that PNC aired last night on News Now. GPD Acting PIO Paul Tapao says he’s received numerous calls from the community about the fights and he says juvenile investigators are already looking into the matter.

“As soon as you guys broke the news on the story we’ve been getting a lot of remarks a lot of feedback and we’ve been getting feedback also from the department of education and we also got feedback from the parents of the kids who are involved,” said Officer Tapao. The GPD PIO is referring to two teenage fight videos that have recently surfaced on the web. One video is of two teenage boys fighting one-on-one in broad daylight in front of the Agana Shopping Center. The other is of two girls fighting in a field next to the ocean.

“As the case develops with our juvenile investigation division we’re making arrangements for the parents to meet with the investigators,” said Officer Tapao. “So the parents of some of the kids in the videos actually came forward and spoke to GPD is that what it is?” asked PNC. “Yes. They actually called me directly and they also called through the crime stoppers hotline giving me the information actually identifying who they were and their involvement with their kids within the particular videos,” said Officer Tapao.

The GPD PIO says the kids are minors but he says the parents have been very cooperative. “From what we saw last night and yesterday through the video the kids that are involved are trained and it really appears that they are trained and we want to encourage them keep practicing what you are doing but keep it in the ring and keep it in the gym if you want to compete and showcase your talents there are a lot of competitions sanctioned competitions that actually allow for that,” said Officer Tapao. The GPD PIO says that GDOE superintendent john Fernandez is also working on developing a program that would involve MMA athletes coming to the schools to talk to students about the dangers of violence in the streets.