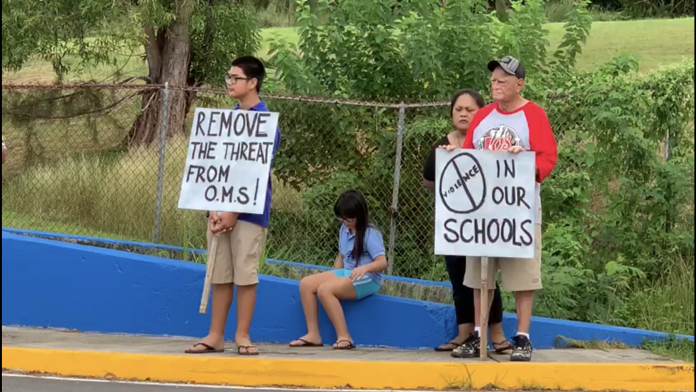 Guam – Demanding a safer campus, parents at Oceanview Middle School are staging a protest, calling for the removal of a student who threatened to bring a gun on campus and shoot up the school.

The incident has sparked outrage amongst the Oceanview community, including parents and teachers who came out of the woodwork to voice their frustrations against the Guam Department of Education for allowing the 7th grade student to return to campus. The student was reportedly suspended and spent some time at the Department of Youth Affairs following the verbal threat he allegedly made.

When the student was allowed to return to school, parents and teachers were outraged. At a Guam Education Board meeting earlier in the week, several parents testified, one of whom–Carol Hinkle Sanchez–is also an attorney. She pointed out that school policy requires expulsion if a student makes any violent threats against the school.

“I’m here to urge the board members, the GDOE members to please revisit and revise whatever current policies that they’re using because a lot of them are [out of date] and for themselves to take a good look at policies and enforce whatever policies are still viable and to make sure that whatever punishments they’re trying to dole out, be it at the administration level at the school or involving the superintendent, whatever punishments they wanna give out to whatever kids that commit infractions, it fits whatever the crime was,” said OMS parent Pearl Lujan.

GDOE Superintendent Jon Fernandez says as a result of the uproar from parents, a work session has been scheduled for next Thursday, Dec. 27, to review and update school safety policies. But some parents feel the meeting was not scheduled soon enough.

“The threat is on our campus at the moment … still currently on our campus so I can’t say he’s acting fast enough. To be totally honest with you, the time for talking more or less over,” Lujan noted.

In responding to media inquiries about the protest, Fernandez said “I do not make decisions about the welfare of students based on protests. I do it based on the information that the school provides and assessment of the needs of the student involved and needs of the school community. We are deeply involved at OMS in addressing both sets of needs. We hope that over the Christmas break, when students are out of school, we will have an opportunity to take a deliberate, thoughtful and effective approach based on the work we are doing.”

Fernandez also said he was concerned about the student involved given the sentiments of teachers and parents.