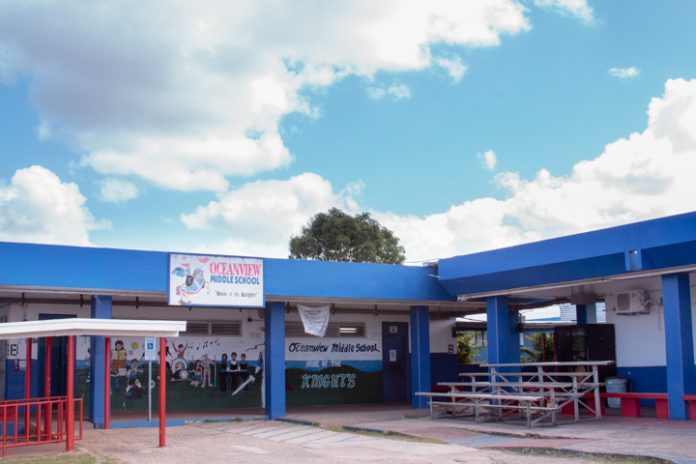 Guam – Parents of Oceanview Middle School are raising concerns about the return of a 7th grade student to the campus Wednesday after the student allegedly threatened to shoot up the school.

During a parent-teacher organization meeting tonight held at the Oceanview campus in Agat, several parents voiced their opposition to Guam Department of Education officials over the decision to allow the student to return to school.

One school parent, who did not want to be identified, tells PNC that the male student had made the threats several weeks ago and was remanded to the custody of the Department of Youth Affairs. Parents then learned that the school’s disciplinary board recommended expulsion of the student due to safety concerns.

However, the parent tells us that they later learned the decision to expel the student was overturned by the GDOE central office. At tonight’s PTO meeting, GDOE representatives were asked to confirm details about the student’s case but GDOE officials were unable to provide any answers, only confirming that “the student will be in school.”

The parent tells PNC that the lack of answers is now causing several other parents to pull their students from school out of fear. “Several parents have decided not to let their kids go to school tomorrow,” the parent tells PNC.

PNC has reached out to GDOE for comment. We are told that Superintendent Jon Fernandez is addressing the matter and will be sending support staff to Oceanview Middle School to talk to students. A more detailed response to PNC’s inquiries is forthcoming, Fernandez says.

Shortly before 4PM on Wednesday, GDOE released the following statement:

We are aware of a reported incident at Oceanview Middle School involving a student and threats made to the school. We cannot discuss the specifics of the incident or any resulting discipline, due to federal privacy laws protecting the rights of students. However, GDOE takes all threats seriously and encourages anyone who is aware of a threat to a school to report it to school administrators and law enforcement.

Any threats received are investigated thoroughly and the threat is assessed based on our risk assessment protocol, developed in partnership with law enforcement.

Any student found to have made a threat is subject to discipline, including possible suspension or expulsion. The disciplinary process involves several layers of review and includes opportunities to review past disciplinary history, prior school interventions and the assessment of immediate impact on safety at the school. In making a final decision, the Superintendent receives input from the school and central office personnel charged with implementation and oversight of the relevant department policies and procedures.

In this particular case, the matter has been addressed through the disciplinary process. However, due to concerns that have been expressed by school community members, the Superintendent has directed Student Attendance Officers to provide support at OMS, required staff presence at the front gate to monitor individuals entering and exiting campus, assigned Inarajan Middle School principal Michael Meno to assist the OMS administration with the development of a safety plan for the school and students, and provided additional Student Support Services Division presence and guidance to offer extra assurance to the school community.

GDOE is aware that a PTO meeting was held yesterday and that parents were called to discuss the issue. However, the Superintendent was not apprised of the meeting until late in the day through a third party. In response, he was able to have Deputy Superintendent Kelly Sukola and Student Support Services Division Administrator Chris Anderson attend.