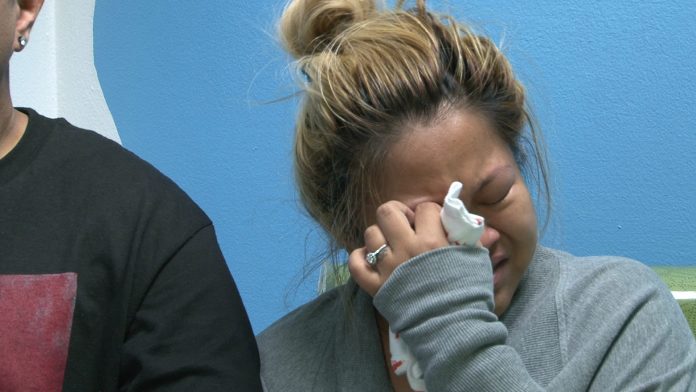 Beverly and Justin Abadilla say it’s been torturous watching their helpless son as they wait to get approved for Medicaid.

Guam – It’s been nearly a week since their son was born with a rare heart defect, but Beverly Encarnacion Abadilla and Justin Abadilla still don’t know how soon their son can be medevaced to California for life-saving surgery. While the community has certainly been extremely generous, it’s now up to the government to get them approved for medical assistance.

Imagine being in a life and death situation in which the only way you can survive is through emergency surgery. Except in order to get that surgery, you need to travel off-island and fork out hundreds of thousand of dollars you don’t have. That’s exactly the situation for Beverly and Justin Abadilla whose son, Julien, was born with a rare heart defect.

“It’s been torture for me,” says Beverly, breaking down into tears.

“It’s been very hard on us. We’ve been working around the clock with family and friend,” says Justin.

Baby Julien needs what’s called a Norwood procedure. He was born with hypoplastic left heart syndrome, a rare heart condition in which the left ventricle of the heart is severely underdeveloped. Without surgery, Baby Julien will not be able to survive on his own.

Beverly tells us that this all was a shock to her and her family. She never had complications during pregnancy and both ultrasounds she had appeared normal.

Mom and Dad tell us that time is of essence and the longer they wait, the longer their son is at risk. They set up a gofundme account and have already raised over $80,000 in 4 days, but they still need more. The medevac alone will cost $187,000.

In the meantime, the parents are anxiously awaiting a decision to get approval for Medicaid from the Department of Public Health and Social Services. Beverly says it’s been frustrating having to go through the application process because they don’t have a lot of time to waste. It could take a while to get approved or worse, they may not even be qualified.

“If we don’t get it–I haven’t really–there is no backup plan, unless we’re able to raise the funds in time,” says Beverly. “I mean, I wish medevac you could just put a down payment on it and then just go but you can’t. You have to pay for it in full.”

The parents describe what this experience has been like for them.

“It’s hard. We have our car and we have this empty car seat and then we have the nursery that’s empty. It’s torture,” says Beverly.