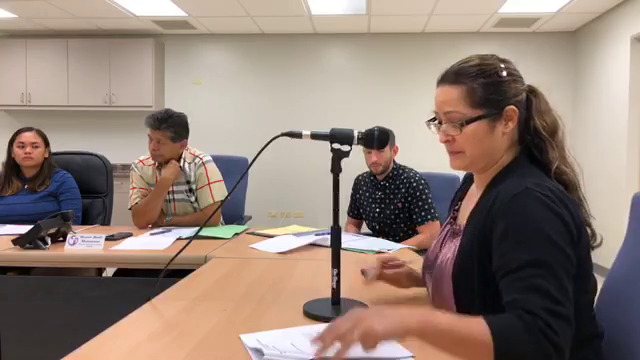 Guam – Parents and teachers gave impassioned pleas at an education board meeting for swift policy changes to stem the tide of violent threats in our public schools.

This comes in the wake of what seems like weekly lockdowns as a result of threats and weapons being found on campus.

Guam has been fortunate to avoid mass shootings in our schools amid a time when our nation contends with a surge in deadly shootings not just in our schools but in our malls, our parks, government buildings, businesses and our homes.

And while many believe our island is still deemed relatively safe, a recent escalation of campus threats is bringing parents out of the shadows to fight for their children’s safety.

At last night’s Guam Education Board meeting, several parents and Guam Department of Education staff emphatically pleaded with board members to address these increasing threats.

It stems from a case involving a 7th grade Oceanview Middle School student who was allowed to return to the campus after he allegedly threatened to shoot up the school, even after he was confined at the Department of Youth Affairs.

“I didn’t send my two sons to school today because I feared for their safety. If a parent has to feel that way, there is something wrong with the policy,” said parent Patti Duenas.

“I’m a 20-year retired Marine officer veteran, five combat tours. Sure I went on missions where I worried about my troops, myself,” noted Chris Merrill who is the parent of six children, four of whom attend OMS. “I have never before today second-guessed my decision to drop off my children at school. I have never texted them before today to make sure they were OK.”

Becky Merrill, a 7th grade teacher at Oceanview called upon GDOE administrators and board members to update its outdated policies to better reflect the realities of today’s society with advancement of technology.

“A written bomb threat gets students expelled from school for a year but a verbal threat with a plan does not?” lamented Merrill.

In the first quarter of 2016, GDOE saw an upsurge of bomb threats at public schools. Many of the threats were written on notes or on bathroom walls. Students who were implicated in these bomb threats faced expulsion for their actions.

Meanwhile, the 7th grader at Oceanview reportedly made the threat against a teacher inside a classroom and then threatened to bring a gun back and “shoot up” the school. The student was reportedly suspended and sent to DYA but a recommendation by the school to expel the student was later overturned.

Familiar with Guam’s laws, Deputy Attorney General Carol Hinkle Sanchez tearfully objected to administrators’ decision to allow the student to return to school and reminded them that current policy should have prevented that from happening.

“I’ve been doing this for 18 years of my life, taking care of every kid in this island, trying to protect them, keep them safe and now it’s my kids,” said Sanchez as she wiped her tears. “What bothers me is that I know what the rules are and I know what the laws are and I find it hard to believe that there’s inconsistency happening at times.”

“He threatened, while he was on campus, he was gonna go get a gun and bring it back and shoot people, staff, students, so that threat is there and that requires expulsion for one year,” noted Sanchez. “Do you think that that 10-day suspension, or whatever amount of suspension time you gave this kid, did it resolve that threat that’s in that school right now? Because it didn’t. The threat is still in that school and you should be looking, when you utilize risk assessment tools in these cases, you should be looking at the background of that kid … and I don’t think that was done because if it was a better decision would have been made.”

One parent criticized the administration’s reaction to the Oceanview incident.

“We’re gonna send people to watch the gate based on what? I’m only reading in the news, it didn’t happen at the gate! It happened in the classroom,” exclaimed another parent. “We are becoming reactive all of a sudden instead of proactive.”

Board Chairman Mark Mendiola assured stakeholders that they are addressing the matter and will be scheduling work sessions where parents and teachers will be invited to give their input.