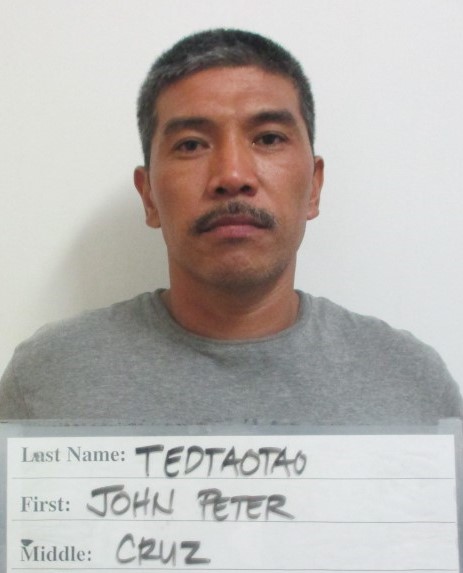 Guam – A man on parole was pulled over not once but twice and both times officers discovered drugs and paraphernalia.

According to Court documents, the first incident occurred on June 30, when officers pulled over John Peter Tedtaotao, who failed to stop at a four way stop intersection.  Tedtaotao who is a parolee did not have a driver’s license and the vehicle he was operating was not registered or insured. Court Documents state that a female passenger was present and appeared “very nervous… fidgeting while seated and fumbling through a bag.” Further stating that her eyes were red, glassy and she grinded her teeth as she spoke.” Tedtaotao informed the officers that because he is a parolee he is subject to search by officers at any time. A search of the bag and vehicle was conducted resulting in the discovery of ice, pipes, and syringes containing ice residue. The second incident occurred  four days later on August 3rd while Tedtaotao was a passenger in another vehicle. During this incident Officers allegedly saw Tedtaotao throw an item out of the front passenger window. A search of the area was conducted and discovered drug paraphernalia consistent with the use of methamphetamine.  Tedtaotao allegedly told police “he was on parole and was afraid so he tossed the item hoping officers didn’t see.” Tedtaotao was charged with two counts of possession of a scheduled two controlled substance.