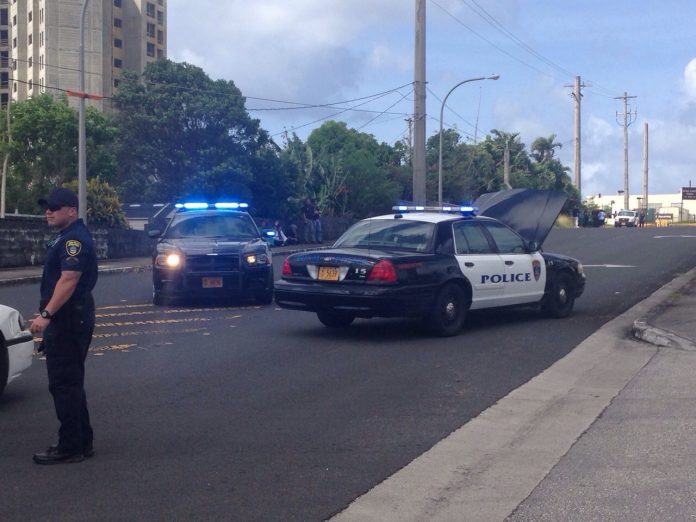 A partial evacuation is ordered after a bomb threat was called into GMH.

Guam – Employees and patients were evacuated from the Guam Memorial Hospital this afternoon after a bomb threat was called in prompting a full scale sweep of hospital grounds. While no bomb was found in the hospital, authorities warn that they are treating this case as terroristic conduct and will find those responsible.

“At 12:19 pm today, a call came in about a bomb threat for GMH. This call came in to e911. Immediately, GPD and Airport Police arrived on scene,” says Guam Homeland Security Spokesperson Jenna Gaminde. She added that the suspect first called 911 then asked to be transferred to GMH.

The bomb threat that was called in to GMH this afternoon may have turned out to be bogus, but because of the seriousness of the threat, first responders treated it as “terroristic” in nature. PNC was at the scene where dozens of employees were evacuated.

“In the beginning, one of my employees came and knocked on the door. She said a code 99 has been called and we need to evacuate. That means a bomb threat. So we gathered everybody up in the kitchen and we checked the coolers and chillers and the locker room, and the cafeteria staff evacuated the cafeteria visitors,” says Dietician Jessica Alingog.

“I was in CAT scan. I didn’t hear the code,” says Marilyn Rivera from the Radiology Department, adding that her coworker notified her of the bomb threat.

Another Radiology Department employee, Hernie Velasquez told PNC he was with a patient at the time the code was announced.

“I told the patient that there’s a code, there’s a bomb threat so we have to secure the hospital and if we have to, we have to evacuate the building,” Velasquez said.

Rivera added: “It’s pretty sad because it’s the only hospital we have. I mean I think that’s prety mean, pretty evil to do something like that. I don’t know, if it does explode, what’s gonna happen to our only hospital at the island?”

Many heaved a sigh of relief as the all clear was given just over an hour later.

“At 1:40 this afternoon they gave us the all clear, clearing both parking lots, the roadways and the hospital of any possible bomb threats,” announced GPD Spokesman Officer Paul Tapao. “As you can see the inconvenience that was greatly caused by this threat and we wanna warn the public that in a sense if you feel that this is all jokes, all for laughs, we do have active investigators, we do have the assistance of the FBI in reaching out and putting closure, putting a stop to these kinds of threats to the community.”

Officer Tapao could not release any information about the caller, noting that an investigation is ongoing.