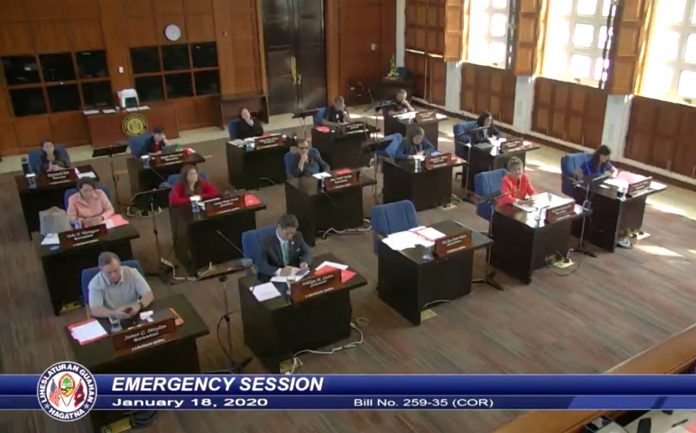 Guam lawmakers have unanimously passed an amended bill that would allow the newly appointed Yona Municipal Planning Council (MPC) to name an acting mayor in that village, without the need for a recall election.

Nelson’s bill initially proposed holding a recall election to find a replacement for jailed Yona Mayor Jesse Blas. It would also have appropriated the roughly $23,000 needed to pay for the recall election.

The costs and tight timelines associated with holding a recall prompted Sen. Jose “Pedo” Terlaje to propose a compromise that would allow the MPC to appoint an acting mayor instead.

Mayor Blas has been in jail since last September on federal extortion and bribery allegations. His trial is scheduled to start on Feb. 4.

He has refused to resign from his office, despite appeals from the Mayors Council and others for him to do so.

However, last week, Blas finally appointed members to the MPC, which he should have done two years ago after he was first elected.

The amended Bill 259 would apply to all island villages whenever a mayor becomes unable to perform his duties. Under the bill, the village Municipal Planning Council would be allowed to appoint an acting mayor, subject to legislative approval.

The amendment was introduced after the emergency session convened and senators went into the Committee-of-the-Whole Friday to take testimony on the initial bill.

Senators learned that current law does not allow for the Guam Election Commission or the Mayors Council of Guam to declare a vacancy merely because a mayor is in jail.

They were told that they had to enact legislation by Jan. 24 in order to meet a March 8 deadline for a recall vote to be set.

They also learned that in addition to a recall election, a special election would likely have to be held to select a new mayor if the recall succeeded. That would double the cost from roughly $23,000 to about $46,000.

And they heard from Bureau of Budget and Management Research Director Lester Carlson who advised that GovGuam is in a deficit and no funds are not available for either a recall or special election.