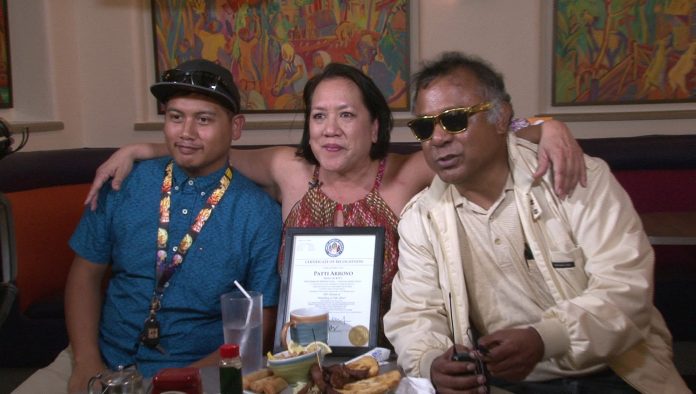 Patti Arroyo was also presented with a legislative certificate during the taping of her 100th episode.

Guam – She’s not only your favorite morning newstalk host on K57, Patti Arroyo is also host to the TV show Something To Talk About and this coming Sunday, Arroyo will be celebrating her 100th episode.

To commemorate her 100th episode, Arroyo was awarded a Legislative Certificate to recognize her for giving the community “something to talk about” with guests ranging from business owners, non-profit organizations, political candidates, international comedians, cancer warriors, healthcare professionals, religious organization members, elected officials and many others.

Senators Dennis Rodriguez and Joe S. San Agustin showed up during taping of the episode to surprise Arroyo with the Legislative Certificate.

Again, don’t forget to catch a very special episode of Something to Talk About this Sunday at 6 pm on ABC7.

The guest for the 100th episode will be David Alcorn, President of King’s Restaurant.