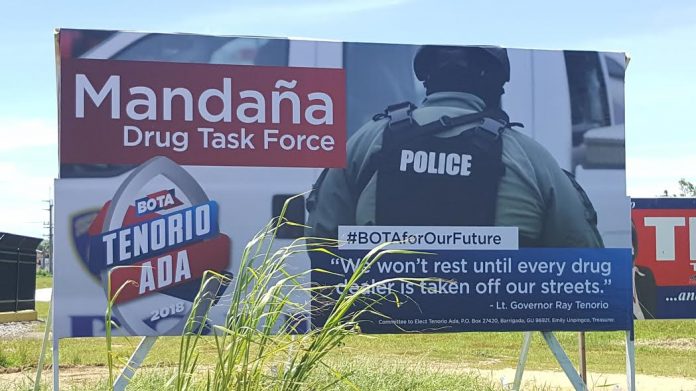 Guam – The Pacific Daily News has confirmed rumors that the photograph of a Guam Police Dept. officer in Tenorio-Ada’s new “Mandana Drug Task Force BOTA 2018” campaign signs is a PDN photo. The newspaper also confirmed that the photograph’s use in the signs constitutes a copyright violation, because no permission was granted. Furthermore, the paper said it has asked Tenorio-Ada to remove the signs. At 8 o’clock this morning, the Mandana sign in Barrigada was still in place facing traffic from near the Tiyan sports field.

As Pacific News Center has reported, the placement of the signs on roadsides in Agat and Barrigada has come under fire for use of the image of a uniformed police officer and a marked police vehicle when (1) local personnel law prohibits sworn police officers from actively participating in political campaigns and (2) the candidate for governor on the Tenorio-Ada ticket, Ray Tenorio, remains the current lieutenant governor in charge of all public safety on island, even though he stands accused in Superior Court of drunkenly attempting to swipe a police sergeant’s holstered hangun six times, then finally grabbing the loaded weapon and waving it around at a crowded event.

The concern among political observers is that the lieutenant governor may be using his authority over the Mandana Task Force as a bully pulpit to instill the impression that local police back him. Nevertheless, elected officials are exempt from GovGuam personnel rules barring public employees from using their “official authority or influence for the purpose of interfering with or affecting the result of an election.”

PNC also reported that the Mandana Drug Task Force signs were erected among other BOTA campaign signs over this past weekend, right after Gov. Eddie Calvo dressed down a news reporter for daring to ask whether the launch of GPD’s “Mandana 2.0” safety patrol program on Friday was politically timed to water down the filing of criminal misdemeanor charges against Lt. Gov. Tenorio, while he remains the Calvo Administration’s public safety czar.

In response  to media questions about the timing of the installation of the signs, the Tenorio-Ada campaign issued the following statement on Monday.

“There have been concerns expressed about the timing of our Mandana Task Force billboard signs. Please note that these billboard designs were designed in March of this year; produced in August and released post primary as was our strategy from the beginning of our campaign. Any concerns with the timing are purely the notions of political operatives from our opposition.”