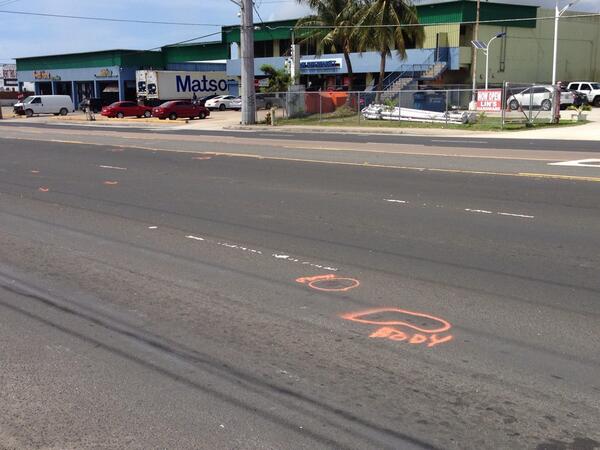 Guam – A pedestrian was killed after being struck by a pickup in Harmon last night. According to police, the man was standing in the road when he was hit.

The accident occurred on Route 16 by the 7-Day Super Market.

Guam Police Spokesman Officer A.J. Balajadia says GPD got the call at 12:06am.

A man driving a 2006 Nissan Frontier pickup was heading north on Route 16 when he hit the pedestrian “who was standing on their lane of travel”, says Balajadia.

The victim was taken to GMH where he was pronounced dead at 12:52am.

His death marks the 8th traffic fatality of the year on Guam. His identity has not yet been released.

2. Friday February 14: GMH Nursing Supervisor Bill Toves says the pedestrian victim of a hit and run driver died at GMH at 5:45 this afternoon. He is the second traffic fatality of the year on Guam.  His identify has not yet been released. Earlier, Nursing Supervisor Cely Mangrobang said the pedestrian was on life support, in “very critical” condition. The man was hit by a vehicle on Route 1 near Ypaopao Estates in Dededo. GFD Spokesman Lt. Ed Artero says the 911 call came in at 6:08am. He said CPR was conducted on the man at the scene, and en-route to GMH.

A 2006, Silver, Nissan Frontier, operated by a male adult for Harmon was traveling north on Rt.16 when the vehicle collided with a male pedestrian (John Doe), possibly Chuukese, whom was standing on their lane of travel.

The pedestrian was transported to GMH where he was pronounced dead at 12:52 a.m.  This marks the 8th traffic related fatality of the year and the fifth within a three day span.