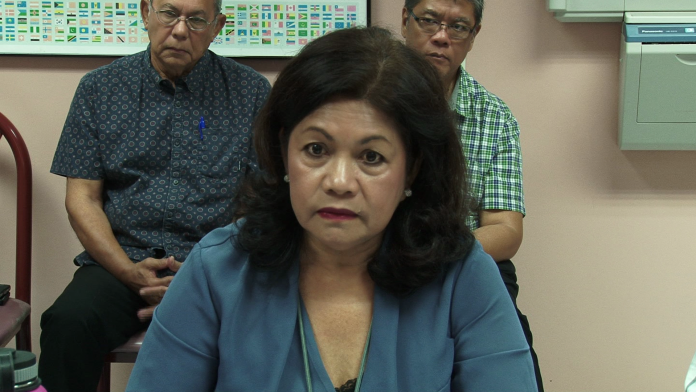 Guam – Surrounded by vendors who have cut them off for non-payment, Guam Memorial Hospital administrators made an impassioned cry for help in light of the repeal of a funding source they were banking on next fiscal year.

“If we don’t get that oxygen, people are gonna die,” GMH CFO Benita Manglona said emphatically as she highlighted a strained relationship between GMH and Island Equipment, which supplies oxygen to the hospital. Island Equipment is one of a handful of vendors who showed up to today’s press conference where hospital administrators fiercely pleaded with lawmakers to address their funding shortfall.

“We have been feeling the pinch due to untimely payments. We have been working actively with Benita and the hospital and we have been continuing deliveries, however, again, to sustain our business, that is becoming more and more difficult because the premise of a good supply chain is for our customers to pay on time and in full,” said Island Equipment General Manager Selina Ashland.

Another vendor, MedPharm, coincidentally placed GMH on credit hold yesterday, the same day the legislature voted to repeal the 2 percent sales that that would partially fund the hospital.

PNC: “Did the sales tax repeal have anything to do with the decision to put them on credit hold yesterday?”

“No, the source, the ideology of the problem of the hospital has nothing to do with us that hopefully will be resolved,” said MedPharm CFO Richard Schnitzer.

These GMH issues struck like lightning at the beginning of the year when the Joint Commission threatened to revoke accreditation, but for a couple years before that, the hospital managed to avoid making headlines after it was bailed out through a $45 million bond, part of which was used to pay off its vendors—at the time, the debt had ballooned to $30 million.

But these aren’t issues new to the hospital.

“I take you back to 1979,” said Manglona as she held up a piece of paper with a copied image of an article from the Pacific Daily News dating back to 1979. The article was titled “Creditors threaten GMH again.”

But GMH says, once again, they’ve reached another critical point. The Joint Commission and now the Centers for Medicare and Medicaid are breathing down their neck, threatening to pull their provider agreements. It’s so critical, in fact, that discussions are being made to determine which of their services would likely be the first to go or affected.

“Because my first love is clinical and primary clinical and that’s what I’m here for, clinical. Now if you wanna cut the entire admission services, the billing, the registration, the facilities, I mean that is ridiculous,” noted Dr. Duenas.

“It’s a minute percentage to the total pie. Over 80 percent of the GMH’s budget is on patient care and then the rest are the support staff like housekeeping, facilities. So where are you gonna cut,” Manglona pointed out.

This is not the first time GMH has been in jeopardy of losing its provider agreement with CMS—an agreement that would guarantee $30 million in federal subsidies. In 2011, GMH was cited for 148 violations, three times the amount of citations in their 2018 survey.

“Did GMH get any political posturing or anything or any big media coverage? No! Because it wasn’t an election year, right? Now 2018, 45 citations and our names have been dragged through the mud,” said a roused Manglona, adding that in 2011, CMS also threatened to pull the hospital’s provider agreement.

While GMH has been in worse situations, CFO Benita Manglona says they’ve been forced to be on the defensive end of an election year. And although the 2011 report indeed contained three times more citations, the 2018 CMS survey, as well as the Joint Commission report, suggest that mismanagement is also, if not more of, a contributing factor in the accrediting institutions’ decisions to pull certifications.

These revelations, supported by official reports by certifying institutions, is partly the basis for the legislature’s decisions to do away with a sales tax and proffer up alternative sources of funding.

Governor Calvo, meanwhile, has appointed Joanne Brown to assist GMH with its administrative operational rules and regulations. A former Republican senator, Brown is currently serving as the general manager for the Port Authority of Guam.