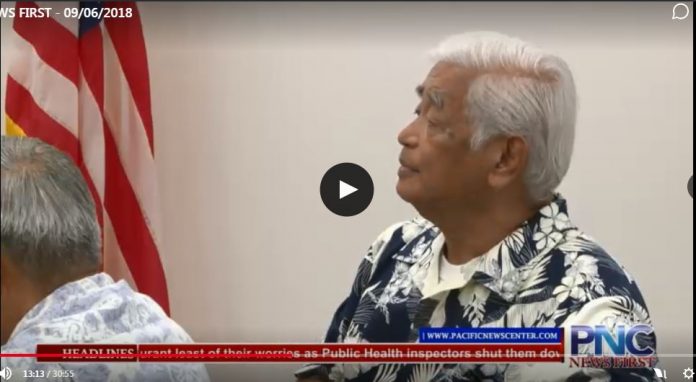 To certify or not to certify—that is the question in the case of Guam’s hotly contested primary election results. Whether the Guam Election Commission certifies the vote sooner or later, Commissioners reportedly run the risk of violating federal law if they don’t get absentee ballots mailed out by a date certain.

Guam – Outspoken populist political advocate Ken Leon-Guerrero is in a race against time. And he’s appealing to the Superior Court for injunctive relief.

“I’m here to file a motion,” Leon-Guerrero told the clerk as he stepped up to the judicial complex’s records reception counter on Thursday.

On Wednesday night Sen. Frank Aguon, Jr. and his running mate Alicia Limtiaco expressed disappointment in the Commission’s decision and especially with Democratic members of the Election Commission Board, via media release. The unofficial Democratic gubernatorial primary winners, Leon Guerrero/Tenorio, soon followed with a statement sharing gratitude for the party unity they have shared with Democratic gubernatorial teams Gutierrez/Bordallo and Rodriguez/Cruz ever since both of those teams issued post-primary concessions to Lou Leon Guerrero and her running mate Josh Tenorio.

Since a recount on tabulation machines last Saturday showed little difference in voting results, Aguon/Limtiaco have declared their commitment to Guam’s struggling people over the party pledge they signed last month as a promise to neither launch nor support any write-in campaign against fellow Democrats.

The Aguon/Limtiaco ticket has styled itself a grassroots campaign that represents the frustrations of thousands of islanders struggling to make ends meet and get ahead, while insinuating that the Leon Guerrero/Tenorio campaign represents establishment interests.

The heat is on

Commissioners are reportedly in a rush to certify primary election results by or before Sept. 11 so they can ratify candidates for the Nov. 6 general election, pull numbers for ballot placement, and budget sufficient time to design, lay out, and print the general election ballots. Their reasoning may rest as much on timing as it does on the fact that they have already recounted as many as 30,000 ballots on tabulation machines, in partial reaction to Aguon/Limtiaco’s urgent public pressure for a more thorough recount. At last assessment, Aguon/Limtiaco was only 254 votes behind Leon Guerrero/Tenorio.

All perceived fairness aside, GEC risks violating the Uniformed and Overseas Citizens Absentee Voting Act if absentee ballots aren’t postmarked by Sept. 22. The law requires that absentee ballots be mailed out no later than 45 days prior to Election Day.

The Commission’s rejection of the hand count request comes in the midst of political activist Ken Leon-Guerrero’s attempt to get the court to intervene.

On Thursday afternoon Leon-Guerrero filed a request for an expedited hearing on his original verified complaint asking the court to compel the GEC to count the 907 primary ballots it has reportedly already deemed spoiled; to hand count all valid primary ballots; and to issue a restraining order to prevent the Commission from certifying election results until all alleged irregularities are resolved.

So the pretext is the general election, coming up November 4. The subtext isn’t so much Republicans against Democrats as rich against poor. The context is right here, right now: whether to certify ballots right away or to delay certification.

“So we’re asking that the court direct or compel the Guam  Election Commission to count the valid portions of 907 ballots, because when you look at how close all the races are, 907 votes could change a number of races, in addition to the gubernatorial race,” Leon-Guerrero said.

But Democratic member of the GEC Board Kin Perez says a hand recount would take more than two weeks, expose ballots to an abundance of human contact and human error, and put the Commission at risk of falling out of compliance with federal law.

“In the history of electronic vote tabulations on Guam, recounts have never overturned results of machine counts,” Perez texted PNC. “In [the] recount between Sen. Joanne Brown (R) and Speaker Ben Pangelinan (D), the difference was single digit and [a] hand recount upheld [the] results of machine tabulation.

“The purpose of instituting [the] machine count was to speed up tabulation AND to limit to [a] bare minimum the human handling of ballots. An even better solution is to go to electronic voting machines. GEC tried to go that route and [the] Legislature mandated against it. The voter fraud perpetrated in 1982 was caught by electronic tabulator.”

Perez admitted to growing angry at the Wednesday night GEC meeting because he’s frustrated by constant requests for recounts which he doesn’t believe will make a significant enough difference to tip an election — and could hasten the risk of a federal violation.

Nevertheless, Leon-Guerrero is keeping his faith in a case he hopes is open and shut in favor of his mission as a taxpayer, voter, resident rabble-rouser, and Aguon/Limtiaco supporter.