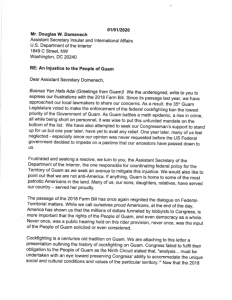 Mayor Rudy Paco of Mongmong-Toto-Maite has received a copy of an anonymous letter seeking support for a petition to reverse the ban on cockfighting.

He brought it to the Mayors Council meeting last week to ask whether any other mayors have seen it.

It’s a petition to Acting Assistant Secretary for Insular Affairs Doug Domenech calling on him to do what he can to allow cockfighting to continue on Guam.

Mayor Paco, who is also a former cockfighter, said if the ban remains in place, cockfighting will go underground.

And the mayor also said he thinks it’s unlikely that anyone will come forward to collect the award Animal Wellness Action is offering for tips on illegal cockfighting because their safety might be in jeopardy.

“If they stop the cockfighting, there is going to be a lot of illegal activity going around. Take for example the $2500 reward. I don’t think anybody would want to open their mouths about this because you don’t get the reward until conviction. So what happens? They’re going to call the individual up and say hey, you need to report to court because we need a witness. And that’s going to put them at risk. Yes sir, risk,” Paco said.

Paco said he no longer cockfights and like Mayor Alvarez he will abide by the ban. However, both mayors will sign the petition calling for a reversal of that ban.