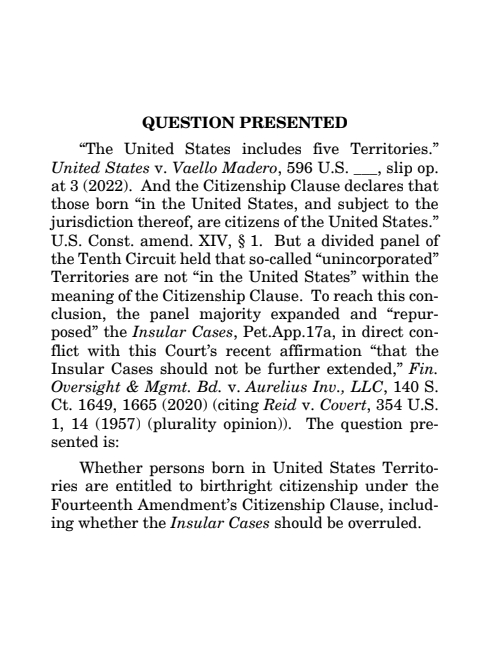 Last year, a divided panel of the U.S.. Court of Appeals for the Tenth Circuit expressly relied on the insular cases to reverse a historic district court decision recognizing that the citizenship clause of the fourteenth amendment guarantees birthright citizenship to people born in U.S. Territories.

Today, John Fitisemanu who is denied recognition as a U.S. Citizen based on his birth in American Samoa petitioned the U.S. Supreme court to take up his case, recognize him as a U.S. Citizen, and overrule the insular cases. Just last week in United States v. Vaello Madero, the supreme court ruled by an 8 to 1 vote that U.S. Citizens in territories are not eligible for certain federal benefits, prompting Justice Neil Gorsuch to declare that the insular cases have no foundation in the constitution and rest instead on racial stereotypes, and deserve no place in our law.

In light of the ruling, and the responsive public outcry, the petition submitted asks whether persons born in United States territories are entitled to birthright citizenship under the fourteenth amendment’s citizenship clause, including whether the insular cases should be overruled.

You may view the petition in its entirety below: