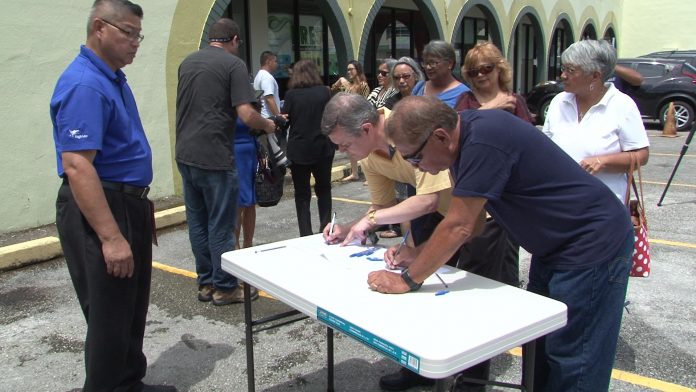 The petition was put together by the group called Silent No More!

Guam – First an ad calling on victims of sexual abuse to come forward and now a petition drive for the legislature to lift the statute of limitations on past sexual abuse. While the goals may be similar, the two initiatives are separate.

Joe Santos is a George Washington High School teacher, but he’s taken time off so he could push a petition to collect signatures.

“Our goal is to achieve 100,000 signatures because everyone on this island should be against child sexual abuse,” says Santos.

Santos held a press conference today to announce his effort to get the entire island behind this initiative. After collecting the signatures, Santos will present the collected signatures to the Legislature to urge them to introduce legislation that will lift the statute of limitations on sexual abuse cases.

Santos says a law was passed in 2011 that lifted the statute of limitations for reporting sex abuse crimes, but at the time it only allowed for a two year window for victims to come forward.

“But that law has since expired and if you read the law, it’s somewhat handicaps people from pursuing civil actions. In the little research that I’ve been able to do … I’d like the law that gets passed out of this petition, to be one that’s more favorable to the victims as opposed to one that shields the perpetrator.”

Santos says just as there is no statute of limitations on murder, the same should be true for child sexual abuse.

“I think we need to understand that if you’re abused as an adolescent, as a child, how you feel when you’re 19, or when you’re 29 or 39, do you have that emotional maturity to confront your perpetrator and do you have the financial capability to file a lawsuit? So that’s the reason I say there should not be a statute of limitations,” notes Santos.

Santos says he felt compelled to begin this drive partly because of events that have transpired in Boston, Los Angeles and Pennsylvania in which dozens of catholic clergymembers were accused of sexually abusing hundreds of victims.

Santos efforts to circulate a petition come just a few days after a paid advertisement was released that calls on sexual assault victims to come forward. However, this ad targets specific dates and locations that are linked to when Archbishop Anthony Apuron was a priest in the 1970s and 1980s, according to Catholic Blogger Tim Rohr.

Santos says while the two initiatives were introduced around the same time, his petition is separate from the advertisement.