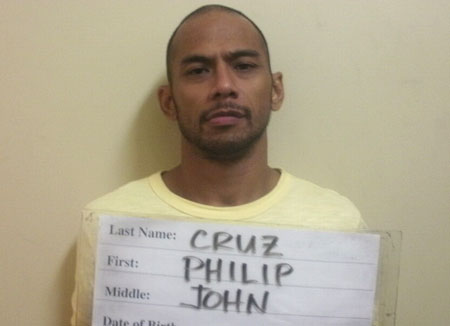 Guam –  35 year old Philip Cruz of Tamuning has been arrested for a burglary at the Estalla Apartments in Tamuning.

A resident of one of the apartments called police just before 11am this morning to report a burglary in progress after hearing unexpected noises coming from his neighbor’s apartment.

Guam Police Spokesman Officer A.J. Balajadia says that when police arrived and entered the apartment, they found Cruz hiding under a bed. He says the suspect had broken into the apartment through a kitchen window. Tools were discovered at the scene and confiscated as evidence, says Officer Balajadia.

Cruz has been booked and confined for burglary.

READ the release Officer Balajadia below:

TAMUNING – 10:49 AM, Wednesday, September 10, 2014 officers responded to a burglary in progress at Estalla Apartment, Tamuning. The caller reported hearing noises coming from the neighbors apartment.

The suspect broke in through a tool shed and then the kitchen window entering the apartment.  The suspect was discovered in the bedroom hiding under the bed.   Tools were discovered at the scene and confiscated as evidence.