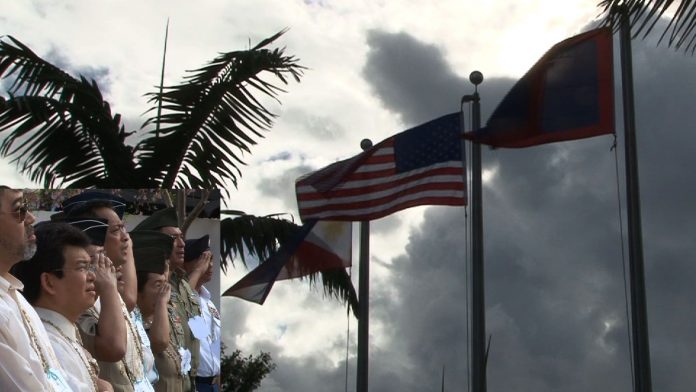 Guests were also treated to a traditional Filipino breakfast at the Top of the Reef.

Guam – Filipinos on Guam are celebrating the 118th anniversary of the declaration of Philippine independence and yesterday, to commemorate the country’s freedom, a flag-raising ceremony was held at the Guam Reef and Olive Spa Resort.

This is the 11th consecutive year that the Guam Reef is holding this ceremony. Promotions Manager Chito De Guzman says although the hotel is Japanese owned, more than 80 percent of the hotel’s employees are Filipinos.

After the flag-raising ceremony, guests were treated to a traditional Filipino breakfast at the Top of the Reef. Consul General for the Philippine Consulate Office Marciano De Borja, talked about the success of the Filipino community on Guam.

“This is something 11 years straight, having this independence day breakfast. I’ve been in Guam only for two years, so this is my second year. I’ve been to Japan, Chile, Spain, New York. I’ve never seen this kind of sponsorship and this is a Japanese owned hotel. But perhaps this is a tribute to the ubiquitous presence of the Filipinos here on Guam and their contribution to Guam’s multicultural society and of course we know that the Filipinos are very much assimilated on the island and they’re still doing very well in the business sector as professionals and as fellow Filipinos,” he says.

Tonight Consul General De Borja will be hosting the annual Vin d’Honneur in honor of Philippine Independence at the Hilton Guam Resort and Spa.