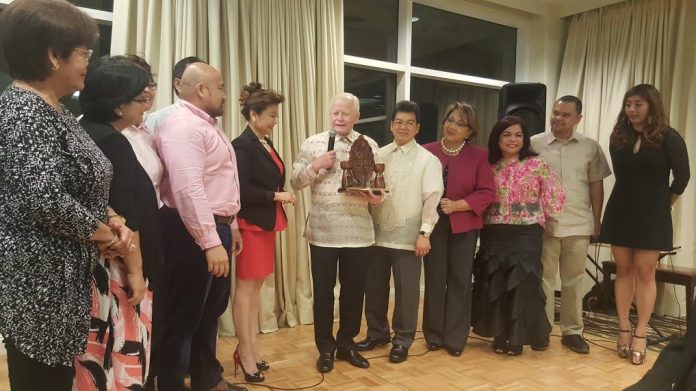 A special dinner was held for Ambassador Jose Cuisia Jr. on Friday.

Guam – As part of his farewell tour, Ambassador of the Philippines Jose Cuisia Jr. visited the island over the weekend to meet with and thank island officials.

Cuisia was appointed Ambassador by current President of the Philippines Benigno Aquino III. Since 2011, Cuisia assumed his post at the Philippine Embassy in Washington D.C. with jurisdiction over the U.S. Virgin Islands, the Commonwealth of Puerto Rico, the Republic of Trinidad and Tobago, the Commonwealth of Jamaica, the Republic of Haiti, and Barbados to name a few. As Ambassador, Cuisia has dedicated his term to promoting trade and investment in the Philippines, strengthening the military and security alliance with the US, and together with his wife, Maria Victoria, promoting Philippine culture, especially among the younger Filipino Americans.

Cuisia says, “It’s an opportunity for me to say goodbye and at the same time, thank them for their continuing support and ask them to continue to support with the next Ambassador.”

After Guam, Ambassador Cuisia will be headed to Hawaii and California.