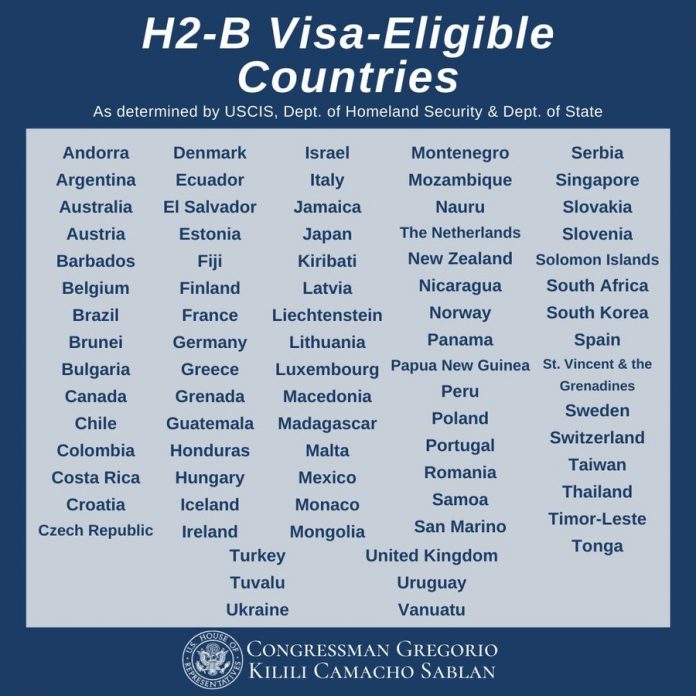 The Philippines is off the list of countries eligible to take part in the H-2B program for the second year in a row.

The list of eligible countries was published in the Federal Register last Thursday and the Philippines is again not on it.

According to the statement on the Federal Register, the Secretary of Homeland Security, with the concurrence of the Secretary of State, have concluded that the Philippines along with the Dominican Republic and Ethiopia “should no longer be designated as eligible countries because they no longer meet the regulatory standards” for H-2B eligibility.

It’s the same statement as last year when all three countries were first barred from the program. The list remains unchanged from last year.

The Philippines was removed over concerns about human trafficking and complaints in some jurisdictions that Philippine H-2B workers were staying beyond the term of their visas.

However, the impact on Guam is limited said Gregg Massey, the Alien Labor Certification administrator at the Guam Department of Labor.

“Keep in mind that we’ve got 1,169 H-2B workers from the Philippines on Guam now,” said Massey and there are expected to be up to 2,000 on island by the end of this year.

The exemption granted in the 2020 National Defense Authorization Act has allowed Guam contractors to bring in H-2B workers from the Philippines provided that the Defense Department has certified that they are needed for projects related to the ongoing military buildup on island.

However, Massey said “its extremely difficult” for those employers petitioning for skilled foreign labor on projects that don’t fall under the NDAA exemption.