Guam  – The Philippines won all but one of their games in the opening day of the Pacific Asia Youth Invitational soccer tournament against a handful of Guam’s youth soccer teams at the Guam Football Association facility in Harmon.

“In terms of skill, the kids here in Guam are not that far behind,” said the Philippines coach Christopher Datu, who also plays goalkeeper for the Diliman Football Club, a 2nd division team in the United Football League. “They are about par to our teams in the Philippines.

“The goalkeepers are quite good, especially the one from the Sidekicks, the team that we drew 3-3 in the U14 division,” Datu added, speaking about the Sidekicks’ Jerome Artero.

The Sidekicks’ Dalton Kinney prevented a win for the Philippines, after scoring a goal in the final minute of play. The Philippines had been leading 3-2 after the first half and almost secured a win before Kinney’s shot.

[ The Strykers’ Leon Morimoto uses his speed to beat a Philippines defender in an opening day U12 division match of the Pacific Asia Youth Invitational soccer tournament. The Philippines won 11-3 at the Guam Football Association facility in Harmon]

Older sister Kayla Kinney broke the scoring ice for the Sidekicks in the first half and Vincent Cruz added another before the halftime whistle. The Philippines’ Isaac Dale scored twice and teammate Matthew Ozil added a goal to his team’s tally in the first half.

Later in the day, the Philippines U14 team defeated the Wings FC 5-2. Ozil scored twice for the Philippines and teammates Mauro Acot, Kevin Bartolome and Louie Dale also scored. Bartolome earned his goal on a beautiful, uncontested header off a corner kick in the second half.

In the last U14 game of the day, the Sidekicks defeated the Strykers 5-0.Kayla Kinney struck twice for her team and teammates Dalton Kinney, Vincent Cruz and Giancarlo Tenorio each scored once.

Karl Bugayong scored the Philippines’ other goal against the Wings, while Preston Boynton scored the Wings’ lone goal. 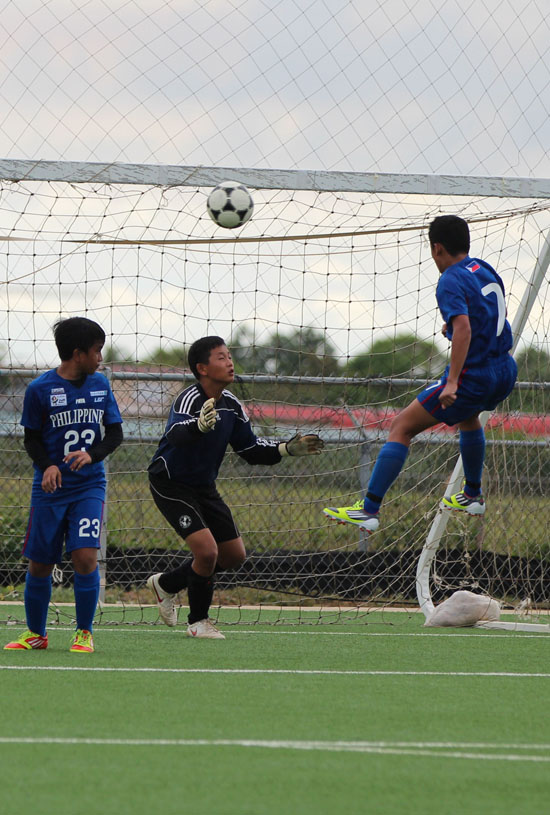 [The Philippines’ Kevin Bartolome powers in a header for a goal from a corner kick against the Wings in an opening day U14
division match of the Pacific Asia Youth Invitational soccer tournament. The Philippines won 5-2 at the Guam Football Association facility in Harmon]