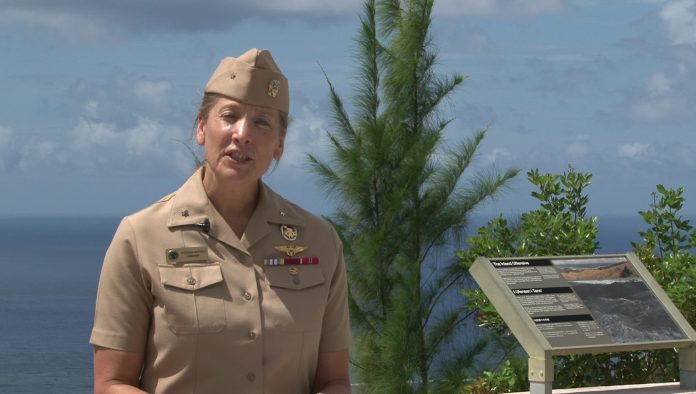 Joint Region Marianas says the photograph of an explosion that spread on social media was of an exercise that happened off the coast of Florida and involved explosives thousands of times more powerful than the ones planned for Apra Harbor next month.

Guam – Following public outcry on the Navy’s planned underwater detonation in Apra Harbor, Joint Region Marianas held a press conference today to allay concerns that the exercise is detrimental to the environment.

Joint Region Marianas Rear Admiral Shoshana Chatfield says it’s become clear why there is now a public outcry over a planned underwater detonation of explosives in Apra harbor that’s also prompted lawmakers to intervene. After all, this is not the first time the US Navy is conducting these exercises. They’ve done it many times before.

“We have done training like that here on Guam 22 times in the last three years,” noted Chatfield.

“An announcement of the training was posted alongside a photo of a 10,000 lb bomb exploding alongside a ship. It looked destructive, inconsiderate of Guam and our ecosystem and unlike any training that I knew the Navy conducts in Apra Harbor,” said the rear admiral. “That event happened in 2016 in a controlled environment far off the coast of Florida–nowhere near Apra Harbor.”

The underwater detonation planned for May 18 will involve much smaller explosives–so small that divers report it barely creates a ripple on the surface of the water.

“They will be detonating a 1.25 lb charge and they’ll probably do four of them and they’ll put them next to a fake mine that they locate in the harbor,” explained Chatfield. “So as we look at the three sites that we normally train, we have very good information that this is where there is the least impact to the environment, particularly because it’s done on the sandy bottom where there’s no coral.”

Last week, after the reports sparked public outrage, 12 senators called for the Navy to cease use of detonators at Apra Harbor. This morning, Chatfield says she met with the full body to allay concerns about the use of the underwater explosives.

“I’ve got a number of people on my staff but each of our installations also has people that are working specifically to preserve the resources that are here on Guam. And we live here. Families love it here and they come here and we know how valuable that is. Our people are in the water all the time and we’re a big part of helping to preserve that,” she added.

Chatfield says public comment was taken into account for these exercises as part of the environmental impact statement, but even with that, the public can continue to submit comments on the matter by sending an email to cjrmpao@fe.navy.mil