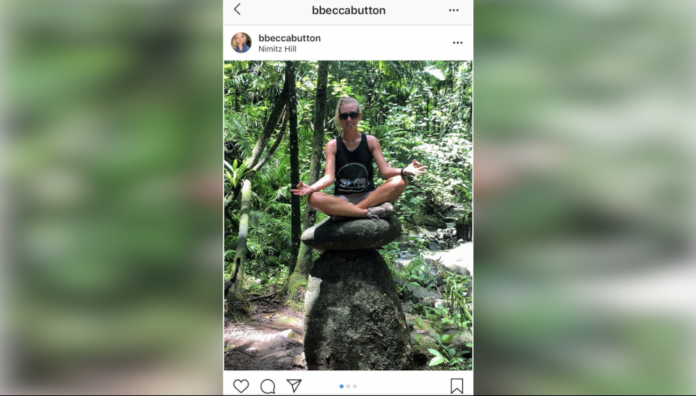 Guam – Is the military doing enough to educate its service members about Guam’s cultural history and sacred sites? Apparently not, says local activist group Prutehi Litekyan, after a photo went viral over the weekend of a military personnel sitting atop an ancient latte stone.

The photo, originating from Instagram, has been shared hundreds of times on social media, drawing the ire of local activists and cultural preservationists who were incensed that a Navy sailor disrespected a sacred and ancient CHamorro latte stone in the San Ramon Falls area.

In the photograph, the woman can be seen sitting with her legs crossed and her hands resting above her knees in a meditation pose while her tongue is sticking out.

In a letter to Joint Region Marianas Rear Admiral Shoshanna Chatfield, Prutehi Litekyan said they are concerned that “service members are apparently not provided with enough cultural awareness training to understand the significance of various cultural resources across the island.”

The Navy sailor has been identified as Rebecca Hutton who is stationed on Guam. Several people on social media are reporting that Hutton has since apologized for her actions, claiming she was not aware that the site was sacred, however, Hutton has since deactivated her Instagram Account and attempts to contact her were unsuccessful.

Joint Region Marianas Public Affairs Officer Lt. Ian McConnaughey tells PNC that Hutton personally apologized to the people of Guam and that her chain of command has been made aware of the situation.

“Joint Region Marianas and the U.S. Navy are committed to cultural stewardship. This type of behavior is not in keeping with the values of the U.S. Navy or Department of Defense. We honor and respect the rich cultural heritage of Guam and its people and ensure that every service member that arrives and is stationed here is trained and is made aware that it is a DoD and Navy priority to protect and preserve that heritage as well aws the environment here in Guam,” said McConnaughey said in a statement to PNC.