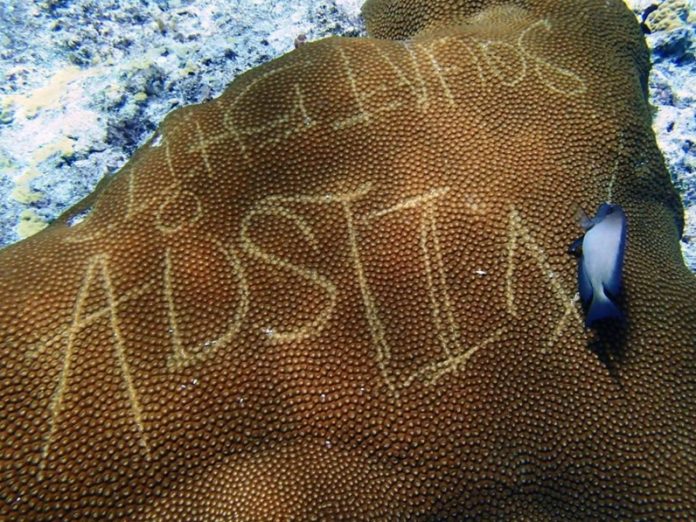 A picture of the piece of coral that was floating around Facebook.

Guam – A photo of what appears to be a name carved onto a piece of coral, has upset many and even prompted a $300 reward that leads to the person responsible.

This picture was taken by a diver on Saturday and not long after the photo was posted on Facebook. It was then shared hundreds of times. Linda Tatreau, retired marine biology teacher says she received the picture from the diver not long after it was taken on Saturday.

“We looked at that and we were shocked we were dismayed and we couldn’t believe somebody would do that. I got a hold of the photographer and he sent e another picture and I posted those on Facebook asking people to share and offering a three hundred dollar award leading to the arrest of the people or person who committed that crime,” said Tatreau.

Tatreau says that coral reefs on Guam are protected. She says it is illegal to damage or even harvest dead coral. She says in the past, it is uncommon to see people carve names onto coral reefs and while this particular coral will not die, it will cause Unnecessary stress to a coral that Tatreau says is already under immense stress.

“We certainly hope it will recover but its definitely going to put it under additional stress and Guam’s coral reefs are already under a lot of stress from Global Warming to El Niño from changes in fishing population from pollutants entering in from the land. Our corals are in trouble and doing something like this just adds to the stress and this coral is much more susceptible to disease now,” said Tatreau.

Tatreau says that the $300 was assembled by five anonymous donors and could increase.