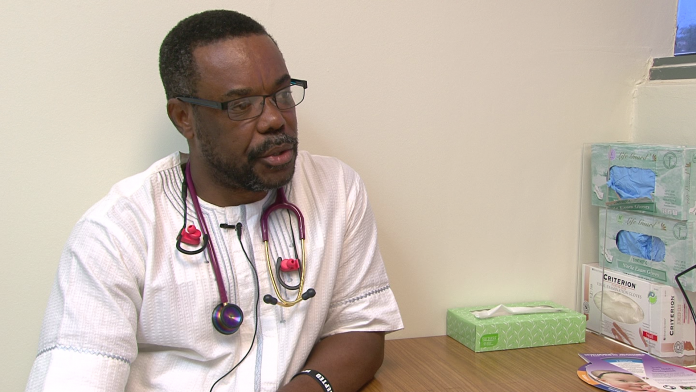 Guam – A physician’s troubled past has come back to haunt him and now he’s left defending his credibility.

A bitter divorce and custody battle, mixed with someone allegedly having it out for Dr. Ugochukwu Akoma is supposedly the reason allegations of sexual harassment have been drudged up from his past.

“It’s painful that I have to go through all of this because this has been ongoing for the last two years. I spent the last two years defending stupidity, literally. You know anybody can dig up anything. You won’t see anywhere where Dr. Akoma had a sexual relationship with a patient. You wont see anywhere where Dr. Akoma improperly touched a patient. But, oh, he complimented me on my clothing and I didn’t like it. Oh, he said I could be a model and I didn’t like it and somebody takes it wrong with them and now you have to answer them everywhere you go,” Dr. Akoma said an in interview with PNC.

Akoma admits that he is a very open person, sometimes blunt, even playful and sometimes too jovial. But he says the allegations against him were merely misconstrued.

Dr. Akoma has been practicing medicine on Guam since 2017, but the complaints of sexual harassment date back to 2007, while he was a practicing physician in the U.S. mainland.

The complaints were filed with the medical boards in Iowa, Texas, California and Arkansas, all involving allegations of sexual misconduct or sexual harassment.

A statement of charges details the complaints in each state, first with the University of Arkansas Medical Sciences Residency rogram in which it was alleged that Akoma made sexual advances toward two female co-workers between August 2007 and April 2008.

Similar allegations were reported while Akoma worked with the Department of Veterans Affairs in Chico, California between April 2014 and April 2015.

While practicing in Texas, documents state that Akoma’s clinical practice was held in abeyance pending an investigation into allegations of sexual misconduct in November 2015.

“Texas took up the allegations. It resulted in a six-month investigation and they dismissed it because it was without merit. There was never any patient or any staff that reported me to any medical board, no charges were ever filed against me. I was never arrested or charged with any crime,” explained Dr. Akoma.

In Iowa it is alleged that Akoma made unwanted sexual comments and sexual advances towards female co-workers in 2013. He was also accused of violating appropriate examination procedures for female patients in 2013. But according to Akoma, he didn’t find out about the investigation until late last year when he just moved to Guam.

Having just gone through a divorce, he says he didn’t have the $60,000 needed to defend himself before the board so he entered into a settlement agreement knowing he never intends to return to the state.

The agreement cited Akoma for sexual misconduct and sexual harassment. He was required to pay a $5,000 penalty. The settlement also stipulated that if he ever return to Iowa to practice medicine he must be monitored and chaperoned by a board-approved female healthcare professional when treating female patients or children accompanied by a female.

According to Akoma, the complaints were a result of his ex-wife’s ploy to destroy his career. These allegations have once again surfaced but this time he says it is at the hands of someone who has it out for him.

“When I filed for divorce my wife now decided … was in high position to destroy my career so she chronicled everything I have ever told her from where i worked, added stories to them and filed with every medical board. At the time I only had active licenses in Texas and Iowa,” he noted.

Akoma is adamant that the Guam Board of Medical Examiners was fully aware when he began practicing on island with the IHP Medical Group and full time at Guam Regional Medical City. Akoma says the Guam Medical Board reviewed the complaint from IHP, Texas and Iowa and they ruled that he has not violated his trust as a physician.

But despite this Akoma shares that he was forced to leave IHP and a month later his contract with GRMC was terminated as a result of the past allegations.

Out of an abundance of caution the board has required a quarterly report over the next few months and that he take a course in boundaries.

Akoma recently opened a private practice called Hepzibah Family Clinic and has these words to share with the community.