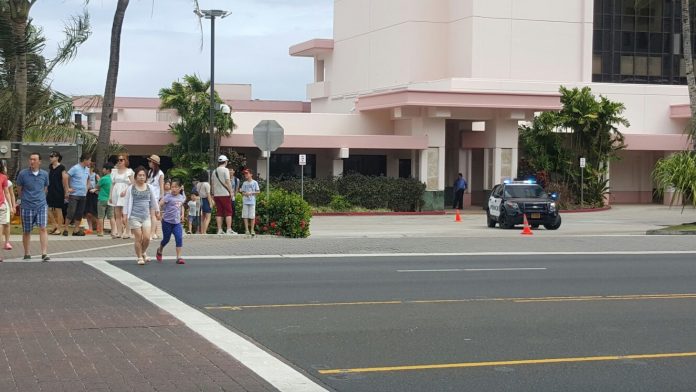 Police say a man who behaved suspiciously and appeared to be rushed, placed the package near the bell hop and took off on foot.

Guam – The Pacific Islands Club in Tumon was evacuated this morning because of a suspicious package found in the lobby area.

Around 9:20 this morning, the Offices of Guam Homeland Security and Civil Defense received a 911 call of a reported suspicious package. Guam Police Department Spokesperson Captain Kim Santos says a man who behaved suspiciously and appeared to be rushed, placed the package near the bell hop and took off on foot. The PIC lobby was evacuated and cordoned off. Meanwhile, the road to the hotel was temporarily closed off to traffic while local and federal public safety officials were on scene.
GPD Tumon/Tamuning Precinct Supervisor Police Officer F.R. Santos explains, “Earlier this morning, we received a call to our precinct about a suspicious package at the lobby in PIC. We had the Airport Police K9 unit conduct a check of the baggage and they deemed it safe. At this time, I decided to open up the roads and clear the area.”
The all clear was given at about 10:45 am and normal operations resumed.