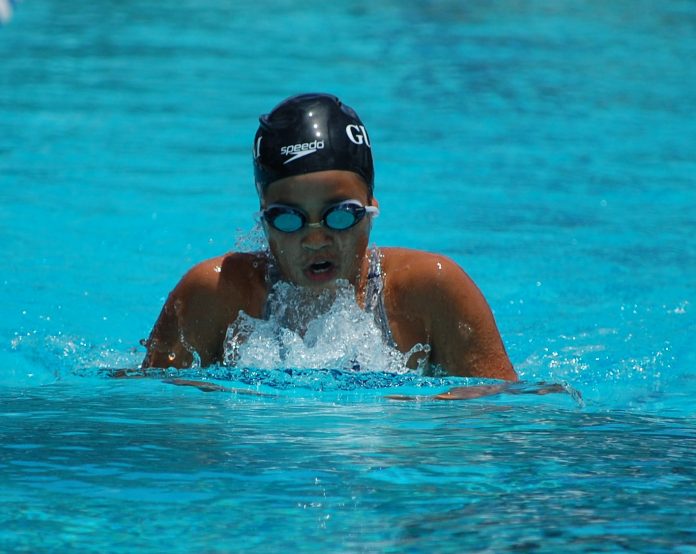 Guam – 14 year old Pilar Shimizu continues to assert herself as one of Guam’s top swimmers as she sets Guam Records in the 50 meter Freestyle (28.33) and 50 meter Butterfly events at the All Island Invitational Swim Meet on March 12, 2011.

Coming off an unprecedented performance at the 8th Oceania Swimming Championships held in Samoa last June where she gleaned 4 out of 5 personal best performances and a Bronze Medal for Guam in the 100 Breaststroke with a Guam Record of 1:18.82, she continues to train with focus.  Among her goals are making the World Championship team in Shanghai, China this July and the London 2012 Olympic Games.  Managing school, family and sport is not easy for the sophomore at Saint Thomas Aquinas Catholic High School, but swimming helps to keep her focused.

Head Coach of Tarakito Swim Club, Pepe Laflamme says that “She has come a long way since swimming at the 2009 East Asian Games in Hong Kong and then having competed against powerhouse swimming nations such as Australia, New Zealand and New Caledonia among others and becoming a medallist in Samoa last summer.”  Coach Pepe also added, “Pilar has a long road ahead refining her technique in all strokes, building confidence and a stronger competitive drive, more disciplined training, as well as ignoring limitations she has imposed on herself in life.”

Pilar continues to train and compete alongside other Guam Swimming Federation athletes.   The final competitions this season will be held at the Hagatna Public Swimming Pool on April 9th and 23 as well as May 14 & 28.