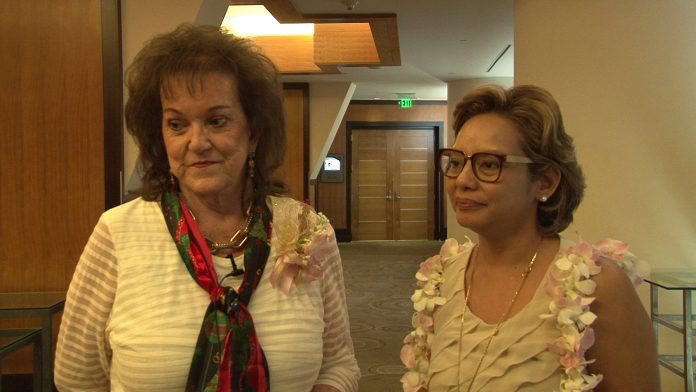 Incumbent President Jenny Cruz will be serving a second term as GMHVA President next year.

Guam – The Pink Ladies of Guam are celebrating their 50th anniversary and their goal in the year ahead is to get back into the floors of the hospital to serve the people, just as they did 50 years ago.

The Guam Memorial Hospital Volunteers Association had their annual Christmas party today and also held a ceremony to install their new officers for 2016.

“We continue to stress on patient care, so that’s my primary goal this year is to get up in those floors and show our pink vests and support the hospital and the patients. That’s really what I want to do this year … exactly what they did 50 years ago,” Cruz notes.

As one of the founding members, Margaret Jones says she’s honored to be able to celebrate a great organization 50 years later to fulfill the association’s mission.

“It’s just a wonderful legacy to [Cecilia] Bamba. She was the one that had the vision and it’s just a wonderful feeling to know that there are a group of women on Guam that still have the urge the care, to go to the hospital and serve the people,” Jones says.

Below is a list of the newly inducted officers of the GMH Volunteers Association: