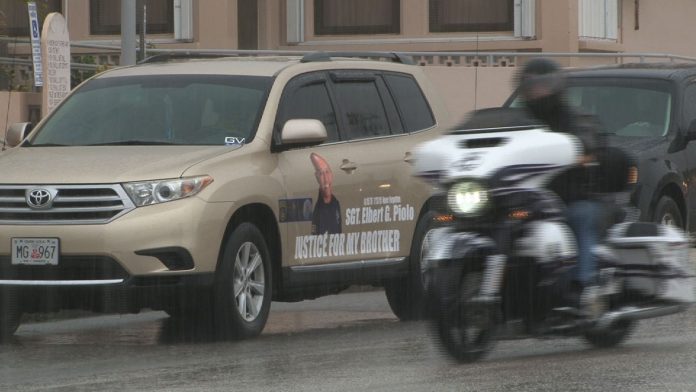 A tribute ride was held for Sgt. Elbert Piolo this morning.

Guam – The family of slain police officer Sgt. Elbert Piolo is speaking out over another potential delay the defense indicated they would be seeking. Meanwhile, today marks the first year anniversary of Piolo’s death. A memorial ride was held for him.

It’s been exactly a year since Police Officer Sgt. Elbert Piolo was killed. Trial for the man accused of murdering him, former Police Officer Mark Torre Jr., has already been delayed to October but Torre’s defense attorney, Jay Arriola, says he intends to seek a continuance of trial. Piolo’s brother, Edison Piolo says they are disappointed with the news.

“No matter how long this thing goes, how long they’re gonna make excuses, prolong it like that, we’re not gonna back down, we’re gonna keep on fighting,” says Edison Piolo.

They started at Santa Barbara Church in Dededo, stopping at several police precincts and at Adelup before making their way to Our Lady of Peace memorial park, Sgt. Piolo’s final resting place.

Edison Piolo describes what the last year has been like.

“As for us, we’re hurting. Especially the kids when they see the dad’s truck. It really breaks [our hearts], especially Jaden (Sgt. Piolo’s eldest son),” he notes. “It’s heartbreaking because Zai Zai (Sgt. Piolo’s youngest son)  calls me daddy and Zai Zai needs his dad. The wife, my sister in law and the kids. Who’s gonna take them to soccer practice?”

With a year gone by and still no resolution to the case, Edison Piolo says, “It’s like we’re just reliving it again especially when we got his truck back. It hit us a lot.”

Torre has pleaded not guilty to charges of murder, aggravated assault and manslaughter. Based on reports by defense experts, Torre may be using a number of defense strategies.

Just some of the possible strategies that have already been disclosed include self-defense, alcohol-induced blackout or post-traumatic stress disorder, to name a few.

Torre, according to the prosecution, shot Sgt. Piolo in a drunken rage as Piolo dropped Torre home after a night out. Piolo managed to call 911 and even identify his alleged killer. However, he passed away a few hours later at the Guam Memorial Hospital.

A one year anniversary rosary is being held tonight at 7 pm at the Piolo residence in Dededo.

The next hearing for Torre is August 15 at 9 am.