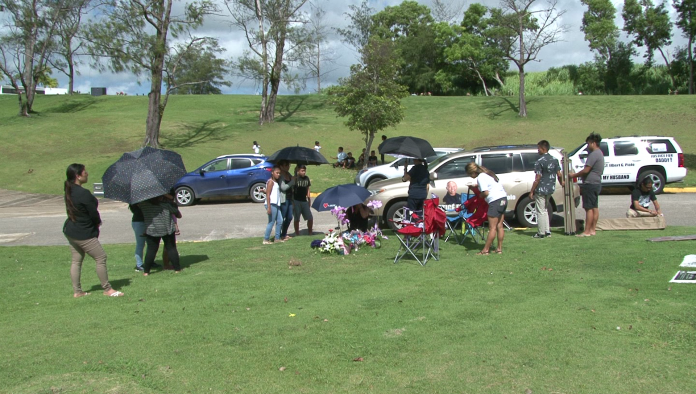 Mark Torre Jr. is supposed to self-surrender Friday but he continues to fight his commitment to the Department of Corrections.

Guam – Today marks the second anniversary of the untimely death of Sgt. Elbert Piolo. It’s just one day before Mark Torre Jr., the man convicted in Piolo’s death, is supposed to self-surrender.

Fondly known as Mr. Good Vibez, Piolo’s second anniversary is today and his family visited his final resting place to celebrate his life but they are still stricken with grief as they are continually seeking justice for Bert.

“His kids are growing up without a father and who are they going to look up to? Now I have to be there for them and it’s hard you know because we have so many things ahead,” noted Piolo’s only brother, Edison.

Piolo passed away at 38 years old and his brother Edison says for his family, the hardest part for them is knowing that Bert will not be there to share in the accomplishments of his children, adding that the outcome of the trial has only made it harder.

“From the trial, even when my brother passed away, we never had peace; seeking for peace and the Torre family has time to find peace. We can’t find peace when justice is not served,” noted Edison. “It’s definitely hard. It’s really hard. Coming from us, you be in our shoes, you be in our life, our position, it’s very hard so you cannot tell me find peace because if you look over there, this is how we do it. Now this is real life reality.”

In June, Torre was sentenced to eight years in prison for the death of Piolo. The maximum sentence which could have been imposed was 28 years but after hearing Torre’s request for leniency, Judge Michael Bordallo handed down a decision of eight years with the possibility of parole after three years. Since then, Torre has filed an appeal.

“His sentencing, which was supposed to be sentenced and all this appealing and motions or whatever, God knows, you can tell already, he has tried to not serve time,” said Edison. “He may be serving eight but maybe plus good behavior, less than eight. So it’s hard and it’s unfair for other inmates did less crime get more time.”

Edison adds: “Since day one, my brother died, we have been dragged through all this trial and everything. It hurts us cause we have to relive that fact.”

On Friday, Torre will appear before Judge Bordallo to address a motion of release on bail pending appeal. The hearing will determine whether or not Torre will have to self-surrender to the Department of Corrections before 6 pm.

“We are not going to attend cause you know I put it in the hands of God and I am wishing Michael Bordallo sees, you know, this is a life,” Edison said.