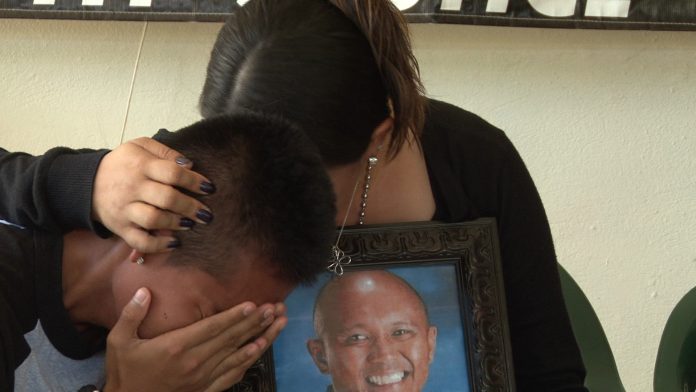 It’s been nearly six months since the death of Sgt. Elbert Piolo, but the family continues to grieve for their loss.

Guam – For the first time since his death about five months ago, the wife, son and father of Sgt. Elbert Piolo are speaking out about their loss and their reaction to a judge’s decision to let a potential witness and the murder suspect back together.

We sat down with the Piolo family who say they will not stop speaking out until they get justice.

“We could not accept the fact that he’s gone. The family is still hurting and until we get the justice that he deserves, we won’t stop,” declares Piolo’s mother, Jerelyn, as she clutches on to her son’s picture frame.

The family has been vocal about seeking justice, and in light of a recent decision to lift a stay away order between former police officer Mark Torre Jr., the murder suspect, and his father, Lt. Mark Torre Sr. who is the head of the Guam Police Department’s auxiliary services division and considered a key witness, the family is pushing harder in their quest for justice.

Piolo’s mother says the judge’s order, which came two days before Christmas, dampened the family’s spirits and they are upset with the decision.

“[Their] family should also think about–be compassionate to the victim’s family and to the kids,” she says.

Sgt. Elbert Piolo was killed last year July as he was taking Torre home to his Yigo residence after a night out. Prosecutors believe that Torre shot Piolo in a drunken rage.

“He bring his friend safe to his family on that night. He ignores what calls from [his own] family to come home, but he ignores because he prefers that his friend to be safely home. And then this is what he gets?” she laments.

And for the first time since Sgt. Piolo’s death, his father, Ely Piolo, opens up about his loss and the pain he’s suffering.

“Since my son’s,” Ely says as he begins to choke on tears. “I’m very emotional. Ever since that thing happened, it’s affecting my life–my daily life. It’s really affecting me.”

The father explains that he and his wife were planning to retire to the Philippines, but because of their son’s untimely death, they will have to continue working to help their grandchildren.

Sgt. Piolo’s wife and son also spoke for the first time since his death. His wife, Mika, says she’s been able to get by through the loving support of family, but she knows it will be a difficult road ahead for her and their four children: 14-year-old Jaden, 10-year-old son Zayven, 9-year-old Elana and the baby of the family, little Ezias, who was only 8 months old when he lost his father.

“I’m okay now, but in the long run I’m not gonna be okay because Elbert was the main provider for our family,” the widow explains. “That’s four kids to take care of and they have needs and they have wants.”

As the eldest of the siblings, Jaden says he’s doing his best to fill the shoes of his father as the man of the household, but at such a young age, Jaden says he still needs his dad too.

“I just really miss my dad,” Jaden says as tears stream down his face.

“I can never have all those laughs with him. I can never make any more memories with him because now he’s gone,” he says as he burrows his face in his mother’s arms.

It’s in this pain that the family finds their strength to continue to push for justice. It’s not just on social media that Sgt. Piolo’s friends and family have been vocal. Every few weeks they hold rallies at various intersections. His brother, Edison, has given back to the community by painting bus stops in memory of his only brother and their cars carry messages of justice and also of hope.

“We know we can’t get Bert back but all we can do is keep on fighting,” Edison says.

Torre Jr. has pleaded not guilty. His attorney’s requests for a forensic expert were denied, but he was allowed a private investigator. Torre is currently on house arrest. He was initially held on $500,000 cash bail but it was reduced to a $165,000 property bond.

His next court hearing is set for January 28.