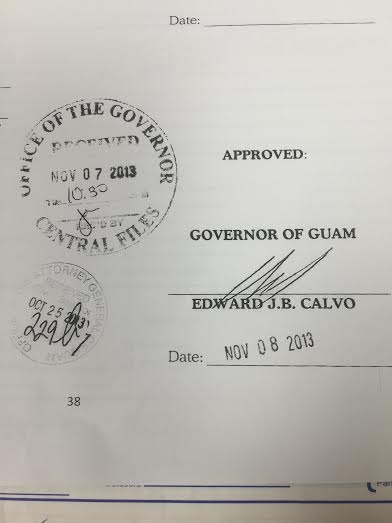 Guam – PNC has found that there is indeed some documentation on the $3.2 million dollar federal grant for the veteran’s cemetery but it only accounts for $2.7 million dollars. The documents were filed with DPW’s building permit’s section and they were also stamped received by the Attorney General’s Office and the Office of the Governor.

The Public Auditor was not able to complete an audit of a $3.2 million dollar federal grant for renovations to the Veterans cemetery because the Guam Veteran’s Affairs Office had no documents relating to the grant. The current administrator Martin Manglona told the Public Auditor that the previous administrator had told him that the documents were stolen during a burglary of their office. There was no documentation on how the project was put out to bid, who bid on the project or even who was awarded the project.

PNC was able to find the actual contract between the Veteran’s Affairs Office and the contractor down at the Department of Public Work’s building permits section. The contract was awarded to the Asanuma corporation for a total of $2,747,270 dollars. There is no documentation as to the remaining money from the $3.2 million dollar grant.

Unfortunately the contract itself doesn’t say exactly what the scope of work was it only states that it was for expansion and improvement work on the veteran’s cemetery and this part was actually written in. The scope of work was contained in blue prints that were filed away in storage at DPW and not available as of news time.

The contract was also signed by the Attorney General of Guam and Guam VAO Administrator John Unpingco. The certifying officer who certified that the funds were available was Office of Veterans Affairs employee Cynthia Gogo. This seems to go in line with what the public auditor told PNC, that the Office of Veteran’s Affairs handled the grant in house and administered the funds out of their own checking account.

PNC asked the A.G.’s office if they had copies of the actual bid proposal or any other documents related to the Veteran’s cemetery grant but as of news time there was no response.