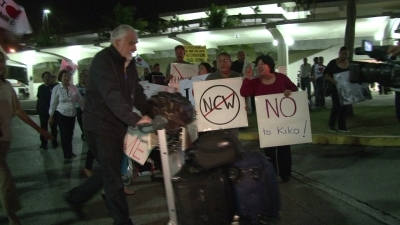 Just this last week, the leader of the Neocatechumenal way in the U.S., Guiseppe Gennarini, landed on Guam to attend meetings at the seminary.

Guam – Tensions continue to boil over between catholic protesters and members of the Neocatechumenal way. In fact police had to respond to a protest at the Redemptoris Mater Seminary today.

Protest is their only medium to voicing their concerns says Marilu Martinez, who, along with dozens of protesters, gathered outside of the mater day seminary where police were called after a couple of protesters walked onto the seminary property.

“So we walked in, very peacefully, we weren’t damaging property or anything like that but somebody did meet us at the entrance and said if we did not leave, they would call the police on us, but we discussed that we felt we had every right to remain on the property since we are Catholics, just like they had the right to be there themselves being Neocatechumenal (way),”  said Martinez.

Martinez refused to leave and thus the police were called. She maintains their right to be on the property since she was told the seminary belongs to the archdiocese of Guam, to which she is a member.

“I…I want to know, what is their purpose here in Guam,” says protester Priscilla Quichocho. “So what is the purpose of their visit here on guam, if none other than their interest in the property in Yona, that I want to know.”

Martinez says after they refused to leave, police showed up. The protesters refused saying the only person who can tell them to leave is archbishop Anthony Apuron.

“We made it a point and he understood the policeman to speak only with archbishop because like she said, we emphasize that he is our leader and we will listen to him if he told us to leave. So he comes back out saying the only persons that came out to talk to him and he claims that director identified himself as Father Pius,” said Martinez.

Eventually, Martinez and the other protesters left the property to continue protesting on the sidewalk.

According to GPD PIO Capt. Kim Santos, at 8:25 a.m., GPD was called to the seminary. A police report was taken to document the incident and no arrests were made.