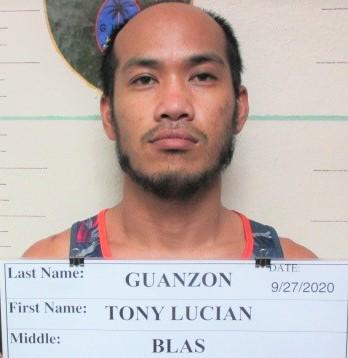 Police have finally caught up with a man that eluded authorities in a car chase nearly two months ago.

Tony Lucian Blas Guanzon didn’t comply with officers when they attempted to pull him over in Dededo in July.

Instead, he fled from police speeding through intersections, ignoring stop signs, and nearly colliding with other motorists.

Police say that Guazon crashed the vehicle in a residential yard and fled on foot.

Officers in pursuit were not able to positively identify Guazon until they met with the registered owner of the vehicle. Police say the owner confirmed that Guazon had borrowed the vehicle earlier that day. Police discovered methamphetamine in a bag left in the vehicle.

It wasn’t until Sept. 26 that police reported coming into contact with Guazon based on information that he was operating a red Jeep Liberty in the Swamp road area.

Police made a check of the area, discovering Guazon and a second person in the vehicle.

A complaint filed against Guazon states that police arrested Guazon in relation to the car chase and discovered suspected methamphetamine, five full metal jacket bullets, and a Smith and Wesson 0.38 revolver.

According to police, they are tracing the firearm and waiting for laboratory results to confirm the presence of meth.

Upon arrest, Guazon invoked his right to an attorney and did not provide any statements to authorities.

Guazon is already facing charges related to criminal sexual conduct and felonious restraint. He was on pre-trial release at the time of the incidents.

He has been charged with possession of a firearm without a firearm’s ID, with the special allegation of felony committed while on felony release; eluding a police officer, and violating a court order.