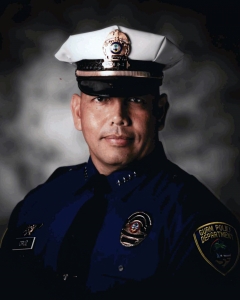 Guam – Guam Police Department Chief J.I. Cruz recently pulled 23 reservists from the field for inadequate training. Today, many questions remain as to why the 23 reservists, who had the same training as previous cycles before them were pulled off.

Police Chief Cruz, who is currently off island, said in a statement, that nothing, is set in stone. Cruz says “He was under the impression that the police reservist program had met standards and qualifications for law enforcement training, we will not know whether this is true until training and other legal and law enforcement officials audit the program.” Cruz says that reserve officers currently in the field with the exception of the last class of 23. Cruz says that by pulling the last 23 he is addressing a problem so that a much bigger problem does not occur. Cruz points to Ferguson, Missouri as a possible scenario that could occur if officers are not adequately trained.

“My goal is to get as many police officers as we can on the street to keep the community safe and I just got off the phone with him and that’s his goal too. So that’s what were gonna do and hopefully we can find some resolution to this issue,” said Senator Brant McCreadie.