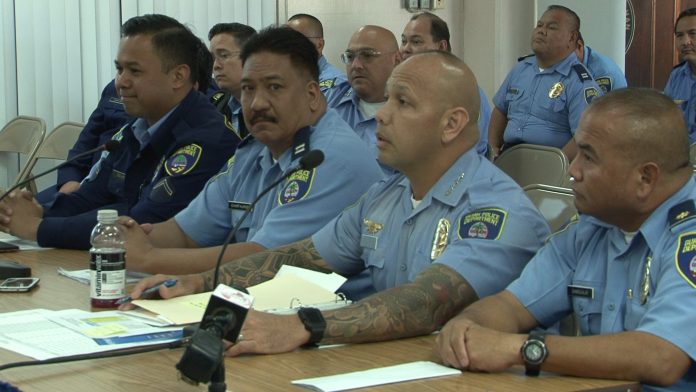 Guam – The Guam Police Department showed up in full force today for a public hearing on a series of bills that proposes to compensate GPD for prior year obligations.

A total of five bills, introduced by Senator Frank Aguon Jr, seeks to reimburse the police department about $1.8 million dollars, some of which date back to 2008.

The five bills Senator Frank Aguon Jr. introduced were Bills 304, 305, 306, 307 and 308. All five bills seek prior year obligation compensation for the Guam Police Department. Bill 304 is for overtime, bill 305 for vendor obligations, bill 306 for the police department’s 3rd cadet cycle, bill 307 for court ordered payments and bill 308 for promised compensation.

Altogether, the amount GPD is seeking adds up to about $1.8 million. For the promised compensation under bill 308, Police Chief JI Cruz says some of the outstanding debt stems from when some officers were asked to fill supervisory roles but were not compensated accordingly. Others are for merit bonuses.

“When these officers qualified for that merit increase and what DOA’s telling us, it appears that there was some disparity and that’s what we’re working through and processing that,” explained Police Chief JI Cruz. who testified in favor of all five measures. “We believe our officers are owed this kind of compensation from when they graduated, when they got their degree and when they’re owed that merit bonus increase.”

Senator Dennis Rodriguez, Jr., however, pointed out that while the merit bonuses might be justified through an established program, promised compensation is not something GovGuam has officially established as a policy.

“We don’t have, the government doesn’t have any policy on promised compensation,” noted Rodriguez.

“That’s why I’m really seeing a problem is that they continue to exercise this practice but not taking into consideration that we must compensate these individuals for what we are detailing them to be,” he added.

The highest amount GPD is seeking is about $955,000 identified in bill 307 for court-ordered payments.

There’s also an outstanding $262,000 owed to officers who worked during storms and typhoons last year.

In addition, GPD is also seeking about $190,000 for rental space at their Tiyan headquarters and their 911 operations in Agana Heights.