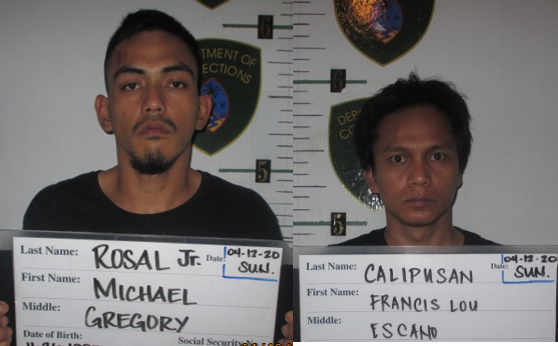 The first case names Michael Gregory Rosal Jr., police say he tried to ditch a backpack containing methamphetamine when he fled from authorities.

Rosal was driving a motorcycle on Route 10 at a high rate of speed when he caught the attention of police.

Police say that while he was running he threw the backpack he was carrying as he scaled a concrete wall. Police recovered the backpack which contained 9 grams of methamphetamine in a fake spray can, a loaded handgun and 13-hundred dollars in cash.

He was booked and confined on charged of possession of a scheduled two controlled substance with the intent to deliver; possession of a firearm without identification, resisting arrest and reckless driving.

The second case charges Francis Lou Escano Calipusan with possession of a schedule two controlled substance with the intent to deliver.

Calipusan was identified as a passenger in a traffic stop who police say they had encountered earlier driving the same vehicle.

According to police in that first encounter occurred in September 2019 and resulted in the discovery 30 grams of methamphetamine hidden in a fake spray can. During a search of the vehicle police also found drug paraphernalia, and over 13-hundred dollars in cash.

“The DEFENDANT was interviewed regarding is case and admitted to ownership of the methamphetamine and that he sells and purchases methamphetamine,” state court documents.

Meanwhile, in the new case, 2 grams of methamphetamine was found in the vehicle, police say that Calipusan admitted to the ownership of the ice and stated that he was on his way to sell it to someone.