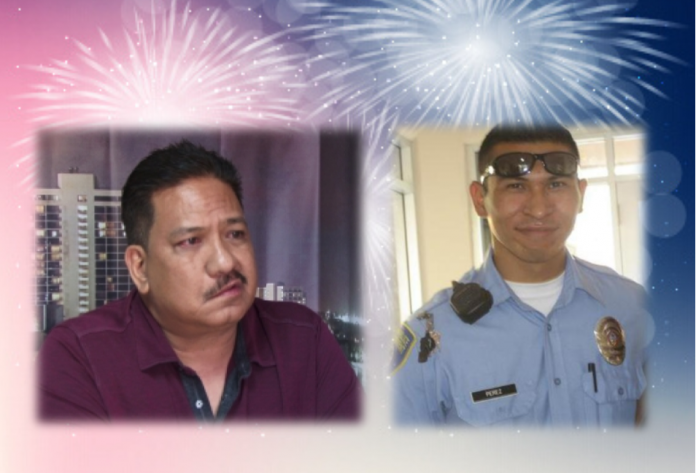 Guam – Deja vu, mere coincidence or outright criminal? A video circulating social media has the Guam Police Department investigating a Christmas eve illegal fireworks display in Agat just as it had done exactly two years ago in another viral incident.

GPD Col. Mark Charfauros, who appeared in the Christmas eve 2016 video and later lost his job because of his actions seen in that footage, is seen making a cameo in the 2018 video, appearing to celebrate with the fireworks display firing off in the background.

Christmas eve was popping down south in the village of Agat as illegal fireworks were filmed being shot off into the night sky and the entire display was caught on camera and has since gone viral on social media.

The incident, according to GPD Spokesman Sgt. Paul Tapao, occurred on Finile Drive in Agat but when police showed up, he says the report of illegal fireworks, at the time, was “unfounded.”

At least one law enforcement officer was also there to witness the grandeur–the person who filmed the illegal fireworks display, an off duty police officer. Tapao states that the off-duty officer has been identified and can also be seen in the video.

While GPD did not disclose the officer’s name, a search of social media revealed him to be Allan Merfalen Perez. Tapao shares that the case is being investigated with the help of the Bureau of Alcohol, Tobacco, Firearms and Explosives.

But Perez isn’t the only one seen in the video, as the fireworks illuminate the sky, a familiar face pops up on screen, former GPD Colonel Mark Charfauros. In the video, Perez even identifies Charfauros by name.

Charfauros was on trial for official misconduct and obstructing government functions in a similar incident exactly two years ago. He was seen on body cam footage berating fellow police officers who were responding to a call of illegal fireworks. The incident happened on December 24, 2016 at a neighborhood in Agat.

Across the street from the home police were attempting to raid was a party Charfauros was attending. That case ended in mistrial when when a witness’ statement claiming Charfauros was affiliated with the Agat Blood Town gang were deemed inappropriate.

While Charfauros’ appearance in the 2018 video can be viewed as a parody, sarcasm or even mockery, it does not mean he is culpable or directly involved in the incident.

For those who were involved, Guam Fire Department acting Chief Joey San Nicolas says the department is ready to assist in the investigation of how the fireworks made its way into the island.

“What normally happens is they will investigate and if anything results in an arrest then we come in on the back end and provide support as far as what charges, verify the charges that we can place on the arrestees,” San Nicolas told News Talk K57 afternoon host Phill Leon Guerrero. “This is something to be of major concern, you’re talking cradle to grave, where it started and where it ends. Everybody along that chain has some culpability in this issue, so yeah its a big concern for us. Obviously getting past through our ports or mail and then the delivery fit, obviously there is a coordinated effort to get it here.”

Tapao states, “due to the uncertainty of the of the grade of the fireworks, GPD will be working with the Bureau of Alcohol Tobacco Firearms and Explosives with this investigation.”

An administrative investigation is also being conducted into Perez’s involvement with the case.