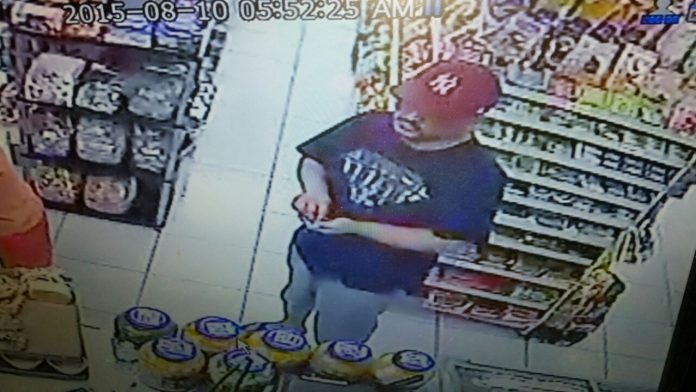 The man was captured on surveillance footage wearing a red NY Yankees baseball cap and a black printed shirt.

Guam – Guam Police are looking for a man who robbed the Cosco Mart along Snake Road in Maina early this morning brandishing a machete.

Guam Police Spokesman Officer AJ Balajadia says the suspect is in his late 20s to early 30s with medium complexion and stands about 5’4 to 5’6 tall.

Balajadia says he entered the store just before 6 am, approached the cashier holding a newspaper and was seen holding a machete with his right hand. He then demanded cash and tried to open the cash register.

Police say the suspect was unable to open the register so he made off with the cashier’s purse instead.

Police are asking for the public’s help in identifying the suspect. If you have any information, you’re asked to call Guam Police or Guam Crime Stoppers at 477-HELP.