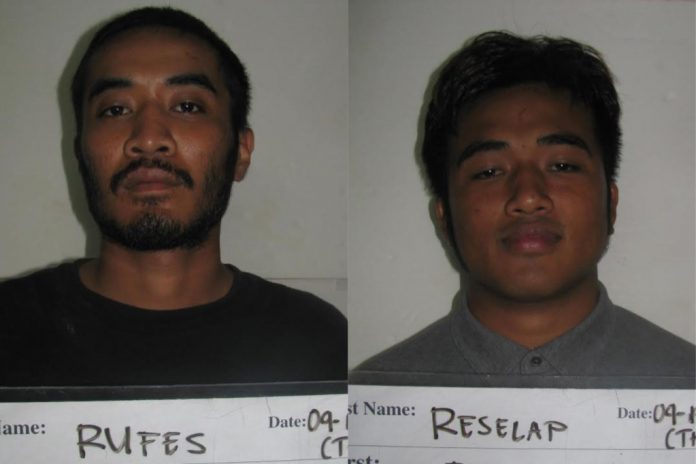 Guam – Two more arrests have been made in connection with two viral videos on social media depicting an attack in the village of Dededo.

On Tuesday, 19-year-old Emanuel Reselap and a 16-year-old minor were taken into custody for their involvement in an attack caught on camera.

At the time of their arrests, Guam Police Department Spokesperson Sgt. Paul Tapao stated that they had information on two more suspects. Those two men have since been arrested and identified as 19 year old Jered Reselap and 25 year old Franky Rufes. Both Jered and Rufes were arrested for aggravated assault; terrorizing; criminal mischief; disorderly conduct; public crunkenness; jurisdiction over and adult; criminal facilitation; guilt established by complicity, conspiracy to commit terrorizing and conspiracy to commit criminal mischief.

Meanwhile, Emanual appeared for a magistrate hearing today and according to court documents, Emanuel admitted to police that he and his brothers were involved in the incident.

As depicted in the video, Emanuel was the individual allegedly carrying the machete which was used to strike the pick up truck seen in the video, causing significant damages.

Court documents state that two vehicles were damaged during the attack. He is also the teen seen confronting the person holding the cell phone recording the attack.

Apparently, this was not Emanuel’s first run in with the law as court documents indicate that he is on pre-trial release for a 2017 case involving charges of armed carjacking, carjacking, second degree robbery, burglary to a motor vehicle, aggravated assault and assault.

When the videos surfaced on social media, the community was in an uproar calling for action to be made to control unruly teens.

“We are still partnering with the media and everyone in the community to deal with this issue. As we put it out there, I want the people of Guam to rest assure that these are isolated incidences that we are seeing. We don’t believe this to be an upward trend in the crime that we are seeing on this island and the Guam Police Department remains committed to being proactive in dealing with crime in the community,” said Chief of Police J.I. Cruz in an interview with PNC. “So I just want it out there that we are dealing with this and I have some of my staff that are going to deal with these particular isolated incidents that have surfaced.”

“But now that we see this, we are extending that and we are having these different entities of the Guam Police Department focus on these isolated incidents of crime to be able to deal with the youth violence that we are seeing and that’s what we believe that to be youth violence isolated in nature and something that we are definitely getting to the bottom of,” he added.

Time and time again, Cruz stressed that these were isolated incidents but are these acts of violence committed by youth really isolated? A review of statistical data from the Department of Youth Affairs comparing 2015 to 2016 shows a staggering increase in the amount of violent crimes committed by youth. In total, it went from 158 cases in 2015 to nearly double at 352 in 2016.

“We see that same trend and we would say that we are aggressively dealing with that and I say that because we do have a lot youth programs. So we do see that there is that spike in the violence,” acknowledged Cruz. Cruz contends, however, that there is still a “downward” trend in violence.

Meanwhile, according to the Judiciary of Guam’s Citizen Centric Report, juvenile delinquency cases have steadily risen from 193 in 2015 to 286 in 2017.

Yesterday, two questions were posed to GPD during our interview: what can be done to curb crime among our youth and can parents be held criminally responsible for the crimes committed by their children?

Since our interview, a new video has surfaced which appears to show an altercation on the same street where the teens were seen in the previous videos. A man in a silver truck confronts a family identified to be that of Reselap’s relatives. The man asks why they are causing trouble. A man in a red shirt can be seen holding what appears to be a large kitchen knife while a minor boy is seen holding a baseball bat. A woman can also be heard saying, “My son is in jail,” while the man responds, “Maybe he should be there.”