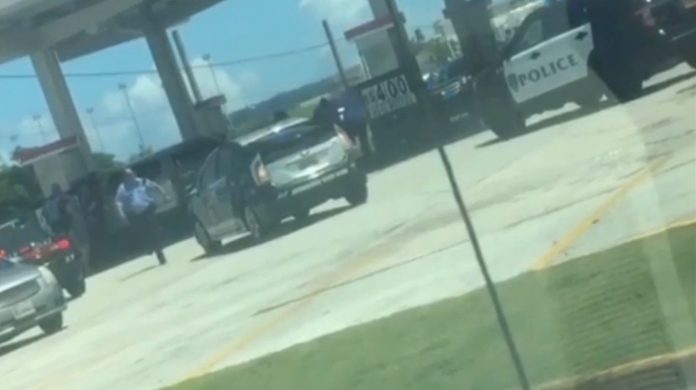 Man flees from Guam Police after being pulled over for expired tags.

A police pursuit that began at 10:45 a.m. on Sunday lasted over seven hours after police attempted to pull over a man driving in Tumuning with expired tags but was later apprehended in Dededo after fleeing from officers.

According to Guam Police Department Spokesperson, AJ Balajadia, 38-year-old Randy San Nicholas Quichocho refused to pull over his 2013 Nissan Sentra when police noticed his vehicle’s expired tags.  He lead officers in pursuit through the Tumuning area until he finally pulled into the Airport 76 Service Station.  Balajadia states that is the location where officers pulled their weapons as a man and a woman approached the Quichocho’s vehicle.  Balajadia confirmed the woman was later identified as Quichocho’s sister.  She and the man refused officer’s orders to stop approaching the vehicle and were then taken down while Quichocho fled the scene in his vehicle, furthering the pursuit.

According to GPD, around 6:30pm Dededo officers received information that the suspect stole a van in front of the Reef Hotel. This lead officers to the Chalan Kareta by Ironwood, Dededo where Quichocho was apprehended.

Balajadia released details that Randy San Nicholas Quichocho was booked and confined after being arrested for the incident in addition to two different cases which all amounted to charges on Criminal Tresspassing, Disorderly Conduct, 2 Counts Assault on a Police Officer, Theft of a Motor Vehicle, Reckless Driving, and Eluding a Police Officer.

Quichocho’s 19-year-old sister, Jenny Lou Quichocho was arrested.  Her charges include obstruction of Government Operations and Hindering Apprehension. She was booked and released.