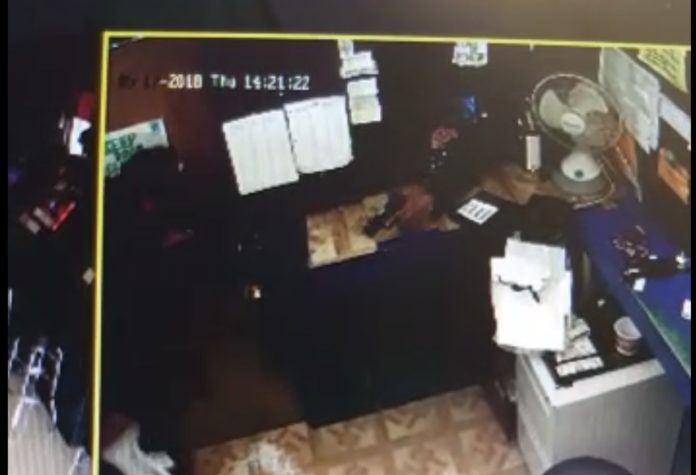 Guam – Two gun shots were fired and an employee at Lucky Land Game room in Dededo was sent to the hospital following an armed robbery on Wednesday and the terrifying ordeal was caught on camera.

Police are now on the hunt for the two suspects allegedly responsible.

According to GPD Spokesperson Sgt Paul Tapao, at 2:20 p.m. yesterday, two men entered the game room, one armed with a black handgun and the other with a stick. The men instructed customers to leave.

Video footage shows that one of the men fires two shots at the cashier who can be seen trying to avoid the shots. As the cashier opens the door, the man armed with the stick can be seen assaulting the cashier.

The suspects fled in an older model red Honda Sedan with the stolen cash and were seen heading toward the Latte Heights area.

The first suspect is described as local with a medium build, last seen wearing a black hoodie sweater with white logo prints on the front and back, blue jeans and was armed with a black handgun.

The second suspect is described as local with a medium build last seen wearing a black long sleeve shirt with a cloth covering his face, brown pants and white sneakers and was armed with a stick.

Tapao says the cashier was taken to GRMC to be treated for his injuries.

GPD is asking anyone with information about this case to call 472-8911.