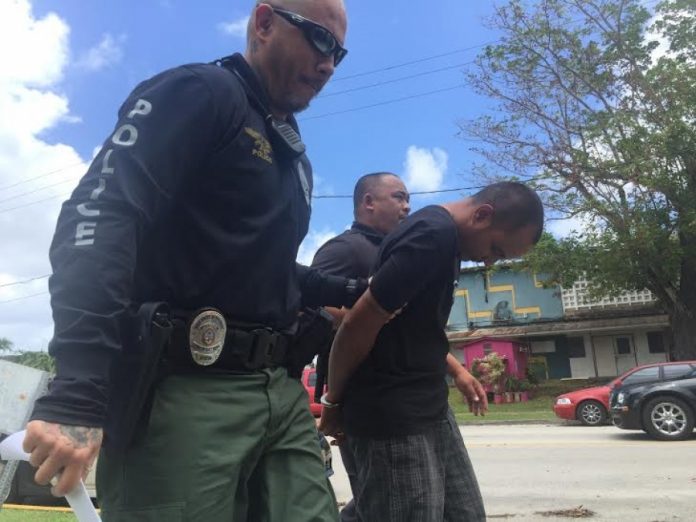 Carriaga has a full rap sheet dating back to when he was a minor. He was also convicted in 2005 for impersonating a Public Health official.

Guam – A convicted con artist who police say is at it again was picked up today after he was set free last week on a technicality. This time, police also picked up 34-year-old Zachary Carriaga’s minor son for his involvement in Carriaga’s alleged scams.

Last week, Zachary Carriaga was arrested and charged with 9 counts theft by deception. He’s accused of scamming residents including Mangilao Mayor Nito Blas, out of money. Police say Carriaga would claim to have tools for sale, take the buyer to a home he claimed to be his, collect the cash from his victims then disappear out the back door without completing the sale.

Carriaga was booked last Thursday, but police had no choice but to release him just a day later. Attorney General Spokesperson Carlina Charfauros tells PNC that because her office did not receive the police report in time on Friday, they could not move forward with pressing charges that day.

Normally the AG’s Office could wait until the next day because under Guam law, defendants must be brought before a judge within 48 hours of their arrest. However, the magistrate’s hearing on Saturday was not scheduled until 2 pm, well after the 48 hour rule.

Today, Carriaga was picked up on six cases, some from last year. Some of these cases, according to GPD Spokesman Officer AJ Balajadia, involve Carriaga’s 17-year-old son. Some of the charges include conspiracy to commit robbery, child abuse, guilt established by complicity, jurisdiction over an adult and theft by deception.

But that’s not all—apparently this is not the first time Carriaga has been arrested for scamming people. It turns out, he has a full rap sheet dating back to when he was a minor.

Court records show that Carriaga has had 5 juvenile cases. Then, as an adult, he was arrested 3 times for theft of a motor vehicle, once for family violence and twice for impersonating government officials.

In fact, he served time for a 2005 case in which he was convicted of impersonating a public health officer. In 2012 police say he went at it again, impersonating a Department of Labor official. But in that case, he was booked and released.

The Attorney General’s Office now has 48 hours to move forward on pressing charges against Carriaga.