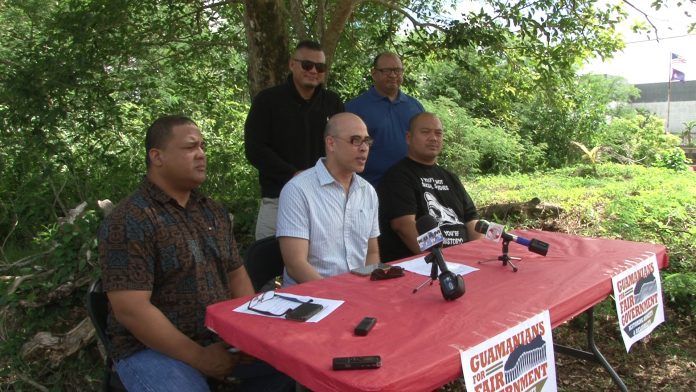 Guam – A political activist group is voicing their support for one of three bills that seeks to repeal raises elected officials received last year. Guamanians For Fair Government says the way in which elected officials got their raises is an insult and disrespectful to the people of Guam.

They call themselves Guamanians for Fair Government and their current mission is to have the law that gave senators and other elected officials received repealed. They’ve been actively voicing their concerns since November last year, when the raises became effective through Public Law 32-208.

“We wouldn’t be here today if it wasn’t for that bill being passed the way it was passed … underhandedly, without a public hearing. It wasn’t an emergency. It was done three weeks after, or two weeks after the election,” says Andri Baynum, one of the members of the organization. “Teachers, we wait years, officers wait years, firemen an everyone else, the hospital, our schools–we wait and we wait and we wait for some sort of relief.”

In light of three recently introduced bills that deal with these raises, the group held a press conference to voice their positions on bills 201 and 202, introduced by Senator Brant McCreadie and bill 204, by Senator Michael San Nicolas. McCreadie’s bills only address the salary increases and retroactive pay the senators received. San Nicolas’ bill 204 is complete repeal across the board that will also include the governor, lt. governor and island mayors.

“Bills 201 and 202 do not address the issue of what happened or how the bills were passed and our express concern is that the democratic process was overlooked last year. It only looks at the financial reasons but not at the principled reasons in which we stand upon,” Baynum notes. “They had a public hearing for other such bills, but when it came to the pay raise they kinda hid it under the table.”

The political activist group says even if bill 204 doesn’t pass, they will continue to push the matter until something is done.

“If they wanna revisit their issue of pay raises after they repeal this and do it the right way, we don’t have any objections to that,” he adds.

On the issue of mayors’ salaries, the group says that’s the only provision in the bill they don’t support. They agree that the mayors deserve their raises.

The group has already collected about 3,000 signatures, both in person and in an online petition. This petition will then be presented during a public hearing for the bills next Tuesday at the legislature.

Guamanians For Fair Government is encouraging the community to attend the public hearing and voice their concerns.