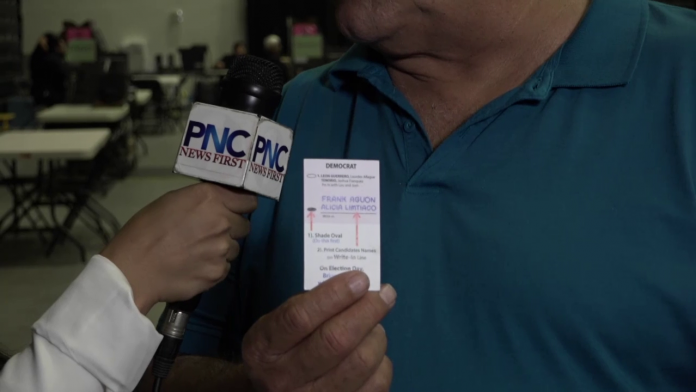 Guam – There was some commotion at the election return center last night as political action operative Ken Leon Guerrero was kicked out of the UOG Field House while trying to get an election complaint heard.

Leon Guerrero’s complaint centered on an eleventh hour attempt to derail the Aguon-Limtiaco write-in campaign by promoting false information on how to vote for Sen. Frank Aguon and his running mate Alicia Limtiaco.

According to Leon Guerrero, mere days before the general election, google ads started popping up on social media and news websites directing people how to write Aguon-Limtiaco into the ballot. The information, however, was not only allegedly misleading, it was deliberate and calculated attempt to invalidate those ballots.

“So we’re very concerned about that because what they did is they took our work product which is a card and they took the card that we created and created a replica of it … and what they did is they created a replica of the card but they changed several facts. Instead of … fill in the oval–circle the oval. And instead of putting Frank Aguon–put Frank Blas. Now these are enough of a deviation that it could invalidate the ballot, that’s why we launched a protest with the Guam Election Commission because we wanted the Guam Election Commission to recognize this effort as a malicious attempt by parties unknown to get voters to invalidate their own ballots and to treat them as valid ballots and hand those counts over to Frank Aguon,” explains Leon Guerrero.

Whether or not the malicious tactic worked remains to be seen but it appears the write-in campaign launched by Leon Guerrero and the gubernatorial hopefuls made enough of a dent to be effective as the GEC machines tabulated 8,161 write in votes, or about 22.8 percent of the votes cast in the governor’s race.

Leon Guerrero later today released what appeared to be his own version of a concession statement through his organization Citizens for Public Accountability Facebook page, congratulating Lou Leon Guerrero for garnering a majority of the people’s “precious” votes.