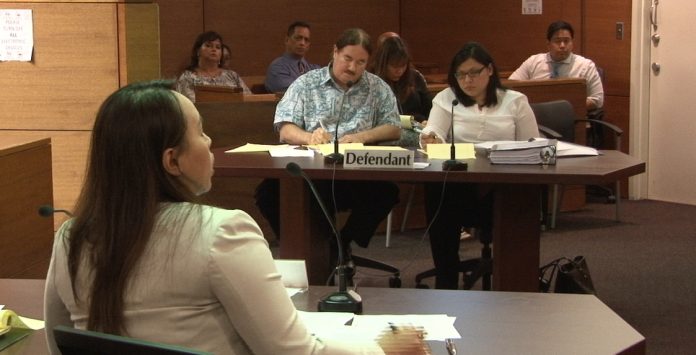 Judge Anita Sukola says she will have a decision as early as Friday.

Guam – Attorney’s representing Guam YTK call it a ten-year saga and today the battle between the Port Authority of Guam and the Guam YTK corporation continued in court. The port authority asked the court for a temporary delay on a writ of execution filed by Guam YTK which is seeking to force payment on a $14 million arbitration award.

Representing the Port Authority of Guam, Attorney Mike Phillips argued for a stay, or a temporary delay on a writ of execution filed by the Guam YTK corporation to force the Port Authority of Guam to pay $14 million arbitration award. His argument, consistent throughout the 90 minute court hearing, If the judge grants the stay, no harm will come to the Guam YTK corporation–conversely, if the court does not and the Port is forced to pay up–irreparable harm will come to Guam’s only commercial port.

“This is one of those instances your honor where more than just the parties to the litigation are concerned, obviously because of the services the commercial port of Guam provides, the entire island of Guam and to a large extent our neighbors in the region and even internationally will be dramatically affected,” says Phillips. “Everything from payroll to its general operations will be affected in the manner that this is proceeding.”

Although Port Authority officials and Phillips have said the 14-million-dollar arbitration payout will affect general operations, Attorney Phillips says that the real harm of forcing the Port to pay the writ of execution while they are in the process of appealing a superior court decision is that there is no turning back once the money is paid.

“Once that happens to the Port you can’t reverse it,. Once it happens to the people of Guam, you can’t reverse it. On the other hand your honor, the proposed injury, the possible injury to YTK would be the delay in the collecting in the amounts of money they are entitled to under the  current situation. It’s not a question of whether they will collect. There is no more solvent entity, businessperson, anywhere on Guam than the Government of Guam,” says Phillips.

But YTK attorneys countered that the Port is just recycling arguments that were already addressed in the original court case back in September, when judge Sukola ruled in favor of Guam YTK. Rapadas also says the Ports Arguments for reconsideration have already been addressed by the Guam Supreme Court.