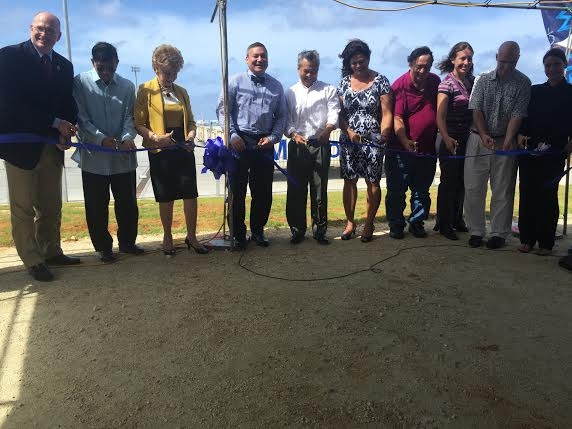 Guam – A ribbon cutting was held at the Port Authority of Guam marking the completion of the Guam Commercial Port Improvement Program.

The final phase included a 4.6 acre expansion of the container yard, the installation of high mast lighting, the construction of a new terminal gate complex runway, the expansion of the east break bulk yard and various other improvements. The completion of these improvements cost a total of $50 million dollars which were funded by MARAD and the port enterprise fund. This marks the end of a major set of improvements that will prepare the port for the influx of cargo that is expected with the military buildup. “Today’s ribbon cutting and dedication is a tangible sign of improving infrastructure here on Guam to support and sustain the realignment of marines from Okinawa to Guam. The Port of Guam plays a critical role in not just the realignment effort but in the lives of all Guam residents,” said Congresswoman Madeleine Bordallo.

“There is absolutely no doubt that we did it right and it was worth the wait. This was a $50 million dollar commercial port improvement project and I will add that it was completed on time and under budget. What’s not to like about that,” said MARAD Maritime Administrator Paul “Chip” Jaenichen.