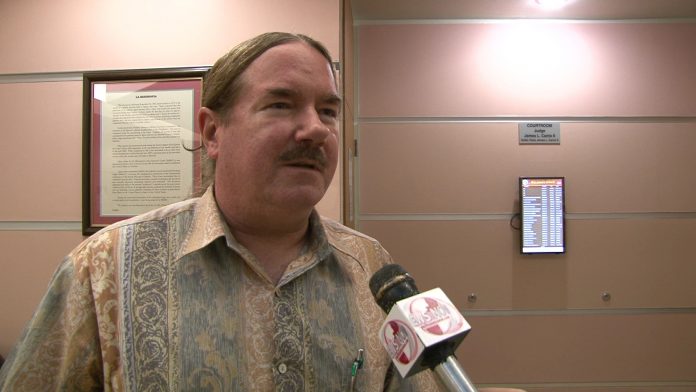 Guam – The Port Authority is not backing down despite numerous court decisions against them in the worker’s comp fraud case. Legal counsel Mike Phillips is appealing a decision by Judge James Canto who ruled in favor of fired employee Frances Arriola.

The Port Authority of Guam continues to maintain that the seven employees they fired back in 2012 were involved in a scheme to defraud the government through a worker’s compensation request filed by Bernadette Sterne Meno, also one of those seven employees.

Despite two superior court decisions ruling in favor of two of the fired employees, Port legal counsel Mike Phillips says they will take the cases all the way up to the Supreme Court.

“Again because of the seriousness of the case, the actions that took place were criminal, it really leaves the port in an awkward situation. Rolling over and having somebody who’s committed these acts just return to work without ensuring a very thorough review of the lower level court and the commissions at least preliminary findings so far is something that the Port feels very serious about,” explains Phillips.

The case stems from a worker’s compensation claim filed by Meno after she fell inside the Port Authority bathroom. The Port Authority board, however, believes that the claim was exaggerated and that some Port management members were aware and even involved in it.

While Phillips insists the actions were criminal, the rulings made so far have only been on the 60-day rule, which prohibits a government agency from taking action against an employee after 60 days of learning of any wrongdoing. So far, for the seven employees, none of them have had a chance to actually argue the merits, or dispute the allegations that they were involved in a scheme.

“Although the in this case the employee pled the fifth when called as a witness on behalf of another employee. And I think smartly and correctly so because without a doubt if she was compelled to testify, the evidence in those hearings showed those acts are criminal,” argues Phillips.

The parties, particularly Phillips and Arriola, were in court today. It was supposed to be an evidentiary hearing on whether Arriola was entitled to back pay. However, since Phillips is appealing Judge Canto’s ruling in the Supreme Court and since he continues to raise a jurisdictional issue, Judge Canto said he would need more time to review the arguments before moving forward with the evidentiary hearing.