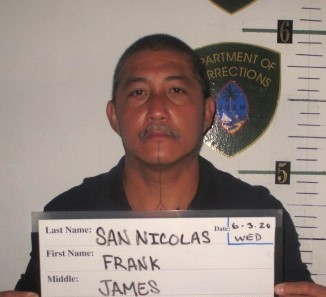 A Port of Guam police officer has been arrested on criminal sexual conduct allegations.

According to a news release from Guam police spokesman Sgt. Paul Tapao on May 18th a woman filed a criminal sexual conduct complaint against 49-year-old Frank James San Nicolas.

San Nicolas is also known as “Ko” and he is reportedly recognized as a “spiritual healer” according to Sgt. Tapao’s release.

The complaint against Officer San Nicolas described an incident that occurred May 16 at a secluded area by Tanguisson Beach. Details of that incident were not described in Sgt. Tapao’s release.

The case was forwarded to GPD’s Domestic Assault Response Team and during the course of their follow-up investigation detectives learned of two other complaints that had been filed against Officer San Nicolas on May 24 and May 29.

Two other women had come forward to file similar complaints after seeing reports on social media of the initial allegations against Officer San Nicolas.

The complaints all indicated that the women had sought out Officer San Nicolas for his knowledge of traditional healing, according to Sgt. Tapao.

In response to a request for comment from the Pacific News Center Port Authority of Guam General Manager Rory Respicio issued the following statement:

“We have been made aware of the arrest of Port Police Officer Frank San Nicolas by the Guam Police Department.”

“These are very serious allegations involving the off-duty conduct of Officer San Nicolas and that’s why I have instructed Port Police Chief Doris Aguero and Human Resources Manager Francine Rocio to immediately conduct an internal investigation to address the administrative portion of this matter.”

“This will be separate from the criminal investigation which is being conducted by Guam Police.”

“Because this matter is now under investigation I am prohibited from providing further details.”